Al Batt: Do pelicans use their bills to carry fish, as well as their babies? 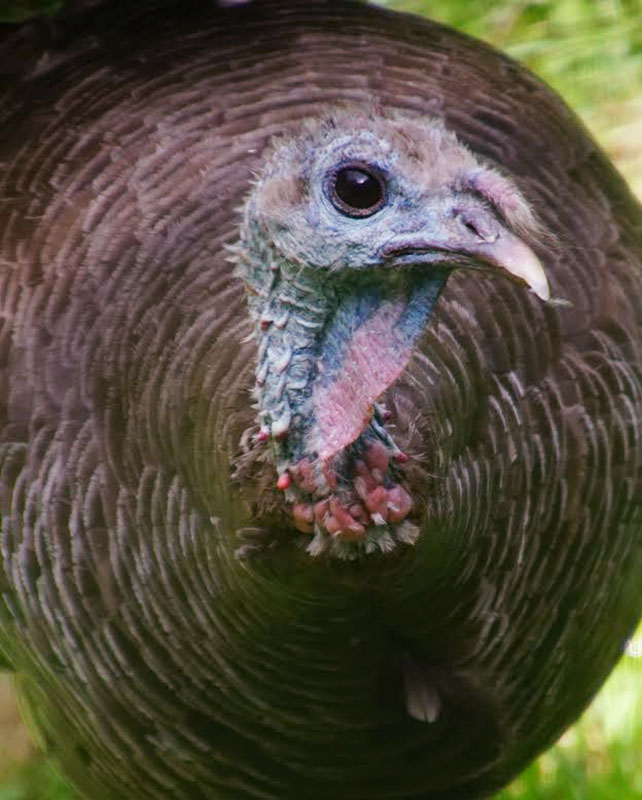 A wild turkey is caught peeping in a window. - Al Batt/Albert Lea Tribune

“Everything is nearly copacetic. It’s muggier than a muskrat’s armpit out there. Working on a humid day is harder than eating bread and milk out of a jug with a knitting needle. I ran into Weasel in town. His mattress had become so lumpy, it was time to deposit it at the bank. I’m not saying that Weasel is cheap, but he is so tight that his eyelids squeak when he blinks. I’m still waiting for his new wallet to hold a grand opening. It might be a while. He’s only owned it for five years. Could I put one of my campaign signs on your lawn? I’m running for office.”

“Really? Which office?” I say.

“I’d considered throwing my hat into the presidential ring, but I’ve decided to be the official catcatcher of Hartland Township.”

“Yeah, it’s like being a dogcatcher, only I work nights. Speaking of dogs, Ma and Pop love playing Scrabble. It gives them another reason to argue. They got a puppy to lend a note of excitement to their lives. The pup ate all of the Scrabble tiles. The canine has been leaving little messages for them all over the house.”

I was greeted by the sapping mugginess of an early August day.

I watched a blue jay pluck a crabapple from a tree and fly off with the fruit.

A wake of vultures fed on a cat killed by a car.

An indigo bunting perched on a tall giant ragweed, a native plant that grows like a noxious weed in crop fields. Pheasants like it, but farmers don’t. Purdue says that it can grow 17 feet tall. It’s a major contributor to seasonal allergies and hay fever. Indigo buntings nest in it.

The swallows were as thick as swallows. The killing of egrets is often cited for inspiring the U.S. conservation movement, but it was the millinery trade’s impact on barn swallows that prompted naturalist George Bird Grinnell’s 1886 Forest & Stream editorial decrying this practice. His essay led to the founding of the Audubon Society. According to legend, this swallow got its forked tail because it stole fire from the gods to bring to people. An angry deity hurled a firebrand at the swallow, burning away its middle tail feathers. Barn swallows sometimes reuse old nests, but not those infested with mites or parasites. They remove old feathers and add mud.

Ants rushed around. E.O. Wilson, after discovering the ant gland that produces odor trails, dabbed a finger with the invisible ant attractant and used it to write his name in longhand on his desk and watched as ants rushed to spell his name with their bodies.

A wild turkey peeked into the window of the house as lightning lit the distant sky.

“One Mississippi, two Mississippi,” I counted silently. Counting the number of seconds that pass between a flash of lightning and the crack of thunder, and dividing that number by five tells me how many miles away I am from the lightning. Five seconds equals 1 mile. This is the “flash-to-bang” method and the National Weather Service recommends taking cover when lightning is 6 miles away or closer. Light travels much faster than sound. Light travels at 186,291 miles per second, whereas the speed of sound is about 1,100 feet per second, depending on air temperature.

“My neighbor has been hunting coyotes for years, but each year, we have more coyotes. Why?” Maybe your neighbor isn’t a very good hunter. Coyotes are clever. Social stress, diseases, parasites, competition for food and predators control coyote numbers. Predators include humans, bears, cougars, wolves and other coyotes. Eagles, dogs and adult coyotes kill pups. Research suggests that where coyotes are hunted and trapped, females breed at earlier ages and produce larger litters. Captive coyotes live as long as 20 years, but few live more than 3 years in the wild.

Mike Callahan of Albert Lea said that because barn swallows grow up and leave the nest so quickly, he wondered how they survived. They are out of the nest in a hurry. Incubation lasts 12 to 17 days and they are nestlings for 15 to 27 days. The parents feed fledglings for a few days to a week. Once on their own, the young swallows feed on flying insects. Various kinds of flies make up a major part of their diet.

“How can I tell if a sandhill crane is a male or a female?” The gender can be difficult to determine. Males are taller and heavier than females. Female vocalizations are generally higher in pitch than those of the males.

“Do pelicans use their bills to carry fish and their babies?” Contrary to cartoon portrayals and online imaginations, American white pelicans never carry food away in their bills. They scoop up prey, dump out the water and swallow their catch before flying off. A pelican’s stomach can hold 1 gallon, while its bill can hold 3 gallons. They don’t carry any young pelicans in their bills.

LuVern Lyle of Oakland asked when monarch butterflies stop laying eggs. Monarchs in generations 3 and 4 are the great- and great-great grandchildren of the overwintering monarchs. Egg-laying dates are through July for generation 3 and through August for generation 4.

“In every walk with nature, one receives far more than one seeks.” — John Muir