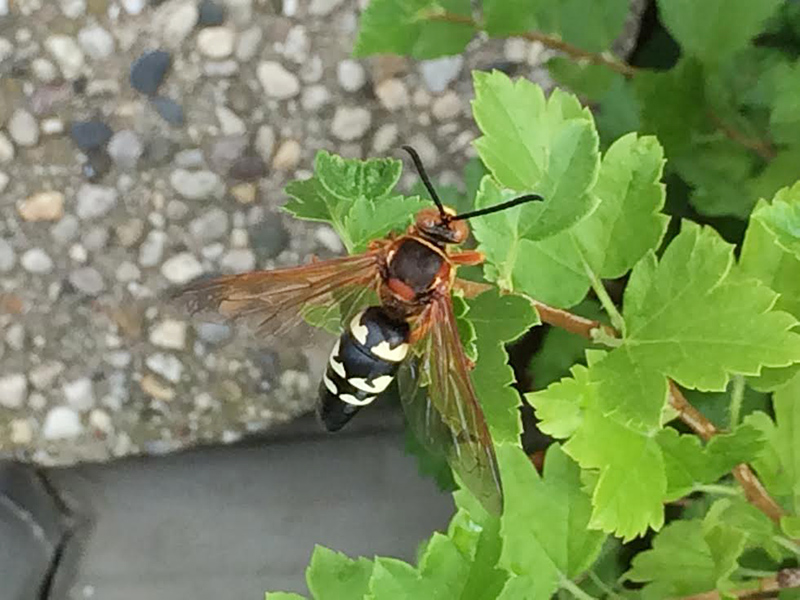 A cicada killer wasp is observed from a distance. -Al Batt/Albert Lea Tribune

“Everything is nearly copacetic. Once in a while something amazing comes along. And it’s me. I’m trying to remain in my seat with my seatbelt firmly fastened, but work gets in the way. One of the cows hurt her foot, so I had to carry her into the barn so the vet could have a look at her.”

“Well, her hind feet were dragging. I got rid of the moles and gophers in my yard. I did it by playing CDs by the Eagles and Wings. Pop is never without his flyswatter at this time of the year. He is a small-game hunter. If you see Pop smile, he has either swatted a fly or thought of someone to blame for one of his problems. I tried to tell Pop whom he should vote for in the upcoming election. He told me that the only difference between my opinion and his cup of coffee is that he asked for the coffee. This coming from a man who when he gets put on hold during a phone call, forgets what he’s holding for. His left turn signal has been on since 2003. I suspect he’ll turn eventually.”

On an expedition to the mailbox at the end of our driveway, I look for birds, mammals, insects and plants. I stopped to investigate a gooseberry plant. I ate green gooseberries often when I was a boy. I didn’t have the patience to wait for them to ripen. I tried one last year. It was so sour, it pulled the holes in my socks together.

It was hot. A day when the generations before me might have gone to a lake. I head for the shade where the skeeters were waiting. I grew up hearing coaches say that they didn’t like quitters. I’d like mosquitoes if they’d quit.

Cricket song had zoomed up the charts during the night, but was quiet in the morning’s sun.

With much of the nesting season past, birds have quieted. Some are molting. Migration beckons. I could almost hear the Clash singing in the background, “Should I stay or should I go?”

I figured the second bird was tired. I say “Uffda” often as a term for a sensory overload, but when I’m tired, I say just, “Uff!”

I attended the celebration of the lives of Keith and Micki Miller, wonderful people formerly of rural Hartland. Their grandson, Chad Miller of Freeborn, told me that his grandparents were good at seeing birds. On the way home, I stopped to watch a beautiful northern harrier fly high in the sky. It was fitting.

“Do pheasants nest more than once a year?” Hens lay an average of 12 eggs, which hatch in 23 to 25 days. If a hen loses her nest before hatching, she will lay another smaller clutch. Some hens have made four attempts at nesting. Renesting attempts hatch as late as the end of August some years. A hen hatches only one brood of chicks per breeding season. She will not renest if that brood is lost. The chicks feed mainly on insects for the first few weeks.

“Do indigo buntings have more than one brood a year?” The female builds the nest, an open cup with an outside diameter of 3 inches woven of bark, grasses, leaves and stems wrapped in spider web. The inside of the cup is lined with grasses, roots, strips of bark, thistle down and occasionally animal hair. Clutch size is three or four with two broods common. The incubation period is 11–14 days.

“Why do birds land on a branch and wipe their beaks? It’s a maintenance behavior to remove debris after eating. It may also hone the edges of their bills, signal appeasement or represent displacement behavior, a measure of anxiety.

Randy Fredrickson of Willmar asked about cicada killer wasps. When these prodigious insects (as long as 2 inches) buzz around, someone asks, “Are we all going to die?” We all will, sooner or later, but not likely from these wasps. Female cicada killers search for cicadas. A cicada is stung, carried to the burrow and placed in a nest. Cicada killers prefer tunneling in light clay to sandy soil in full sun with sparse vegetation and well-drained slopes. Because the female is larger than the male, a female egg is provided with two or three cicadas while a male egg gets only one. After the eggs hatch, the grubs consume the paralyzed cicadas, molt, form overwintering cocoons and emerge next July. The males die after mating and females die after laying eggs. By the end of August, all the adults are dead. Adult cicada killers feed on nectar and the males are unable to sting. The female isn’t aggressive around humans, but if you grabbed one and said unkind things about her mother, she might sting you.

“Of all the paths you take in life, make sure a few of them are dirt.” — John Muir

“The beauty of the natural world lies in the details.” — Natalie Angier