Al Batt: Where have squirrels gone? What are steel-blue cricket hunters? 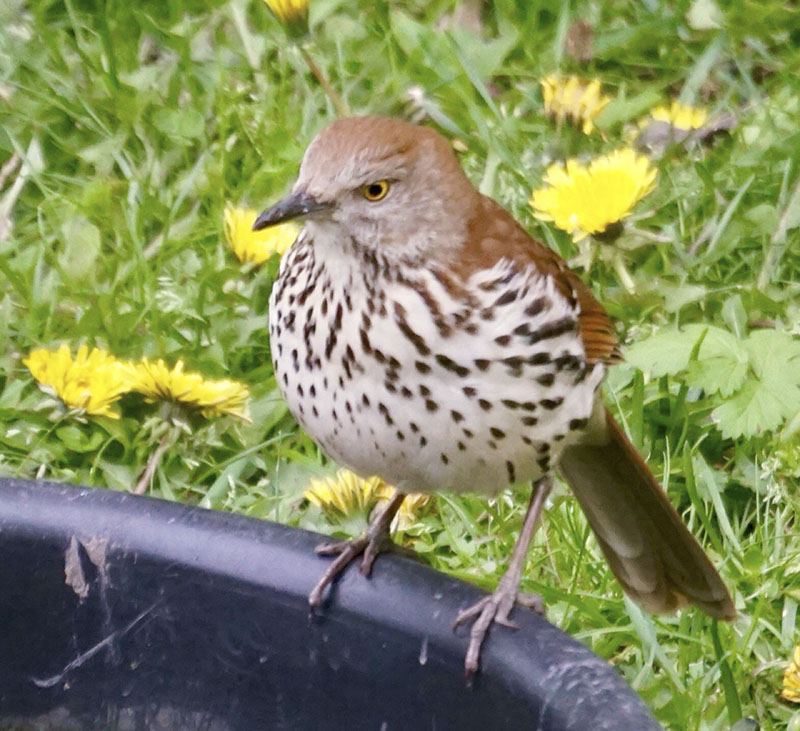 “Everything is nearly copacetic. I’m still as sharp as a bag of wet mice. My goal is to know more today than I knew yesterday. A man like me should be betting on the winning horse and polishing my Porsche, but I find myself working like a horse in a porch with a leaky roof. Things could be worse. I could be one of my friends. Weasel is such a tightwad, I think he has fishhooks in his pockets. When Weasel was a stock boy at the Everything is in Aisle 7 grocery store, he spent most of his time shaking up the pop bottles. Weasel’s family can eat only in the places where none of them have an outstanding arrest warrant. Still Bill, give him a mile and he’ll take an inch, just got a part-time job at the waterpark. Whenever someone gets stuck in the tube slide, they send Still Bill down the slide to knock him out.  Work isn’t a tune that Still Bill whistles well. Me, I spend one-third of my life misplacing things, one-third of my life trying to find them and one-third of my life replacing the things I couldn’t find until I bought the replacements.”

A brown thrasher moved across the lawn like a tiny velociraptor.

There was a squirrel on the road. It had really let itself go since being flattened by a Fiat a few days earlier.

As the day darkened, there was stridulation. Stridulation is the act of producing sound by rubbing two body parts together. See if you can do it. Start with something easy like rubbing your ears together. While you’re tuning up, I’ll tell you that grasshoppers and crickets stridulate. Each species has its own distinctive song. Grasshoppers have a series of small pegs on the inside of their hind legs that are rubbed against the forewing to produce the sound. The pegs on crickets are located on a forewing, while the other forewing has a flat structure known as a file. The pegs are dragged across the file as the wings rub together to produce the song. There is a particular cricket music that sounds like sleigh bells. That is the fine work of snowy tree crickets. Snowy tree crickets are slender, delicate looking, pale green insects. This cricket is our temperature cricket. One formula is to count the number of chirps given in 13 seconds and add 40 to get the temperature in Fahrenheit. It frequents brushy understory plants at the margin of and in woods. In cooler weather, they can be found closer to the ground on the trunks of small trees.

A tree frog was on the window screen. The lights attract flying insects. Those insects attract tree frogs. Tree frogs are remarkable for their capacity to cling to surfaces, thanks to their large toe pads.

You can stop rubbing your ears together now. It’s not making a sound.

Jack Madsen of Good Thunder asked if a popular email has any validity. It’s the one about an aging bald eagle needing to fly off to a secluded place where it plucks out its talons, beak and feathers. It says that that the eagle needs to do this in order to live 70 years and become the world’s oldest bird. This thing has been around for many years and is full of inaccuracies. I have often what writer of fiction wrote this. The bald eagle isn’t the world’s oldest living bird. The oldest banded wild bald eagle lived for 38 years. They don’t “pluck out” their beak or talons. They wouldn’t be able to survive without them. Eagles molt their feathers annually.

Janice Morreim, who lives near Manchester, wondered where all the squirrels in her yard had gone. Squirrel populations fluctuate naturally, especially local populations, due to a number of factors such as the availability of food, water and shelter. Other factors include predation, illness and reproductive success. In the fall, squirrels must acquire a territory and a food storage area prior to winter in order to survive. This might require a change of address. Food is abundant now. They are busily eating and gathering. Squirrels are opportunistic feeders and go where the food is. Maybe a few especially fecund oak trees are drawing their attention. They aren’t particularly territorial, but they do establish a hierarchy. These are all possible reasons. If I had to pick one reason for your dearth of squirrels, I’d say it has to do with family business. Fox squirrels breed twice a year, the second time typically in June through July. The second mating season for gray squirrels is usually July through August. At this time, the mother chases off the offspring of the first litter and the males tend to wander over a larger area. Some areas will lack squirrels while others will wonder where in the world all the squirrels came from. Like all politics, all squirrels are local.

Jack May of rural Mankato sent a video of a wasp for identification. It appeared to be a steel-blue cricket hunter. This wasp looks much like a mud dauber. As you might expect, the steel-blue cricket hunter females hunt crickets. A female scours the ground in search of crickets. Finding one, she stings it into paralysis and flies or carries it to an excavated burrow. Sometimes, it’s the burrow of a cicada killer wasp. She places several crickets into each cell, closing the cell with a plug of soil. A single egg is laid in one of the victims. The larva that hatches consumes the cache of crickets. Unlike yellow jackets, these solitary wasps aren’t aggressive. The males cannot sting.

“It’s not what you look at that matters, it’s what you see.” — Henry David Thoreau