A memorial service for Ben C. Schoon will be at 2:30 p.m. Saturday at the Bonnerup Funeral Service chapel. The Rev. Vern Harris will officiate. Visitation will take place one hour prior to the service. Burial will take place at the Clarks Grove Cemetery. 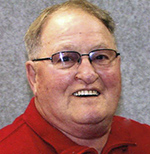 Ben C. Schoon was born March 15, 1943, to Ben B. and Agusta (Knabe) Schoon in Albert Lea.  He was raised in Clarks Grove. Ben worked very hard throughout his life. He worked at Wilson & Co. for 27 years in maintenance. He welded for Almco for seven years and farmed as well.

On Feb. 17, 1962, he was united in marriage to Kathy C. (Bailey) at Calvary Baptist Church in Albert Lea. The family was blessed with three daughters. Ben and Kathy raised their children in Albert Lea.

Ben was a member of New Life Christian Church, where he was a deacon for many years. He also sang in the church choir and helped with vacation Bible school. In his free time, Ben enjoyed horseback riding, square dancing, bowling, church league softball, and riding motorcycles. He was a part of the Stewartville Saddle Club. More than anything,Ben loved his family. His favorite activities included going to his grandchildren’s sporting events and the yearly fishing trip with his family. He cherished every moment that he spent with his wife, children and grandchildren.

Ben is preceded in death by his parents; brother, Verl; sister, Joyce (Orlin) Poplow; and a niece, Dawn Omvig.