Clarence A. Burkhow, 98, of Riceville, Iowa, died on Sept. 10, 2016, at Riceville Family Care and Therapy Center in Riceville.

Clarence was born March 29, 1918, son of Amos and Stena (Monson) Burkhow in Rake, Iowa. He graduated from Rake High School and went on to enlist into the United States Army Air Force in 1941. Clarence was in the military from 1941 to 1945 serving during World War II. After his time in the Air 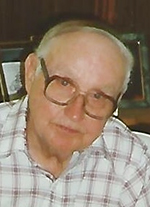 Force, Clarence moved to the Iowa/Minnesota border, near LeRoy, to begin farming in 1955. Clarence enjoyed visiting with his family, friends and neighbors. He was a Minnesota Twins baseball fan and traveled on many fishing trips.

He was preceded in death by his parents; brothers LuVerne Burkhow and Maynard Burkhow; and sisters Alyce Sertich and Viola Bilyeu.

Visitation will be held from 2 to 4 p.m. Sunday, Sept. 18, 2016, at Hindt Funeral Home in LeRoy. Burial will take place in East Rake Cemetery Rake at a later date.

Condolences may be left at www.Hindtfuneralhomes.com.