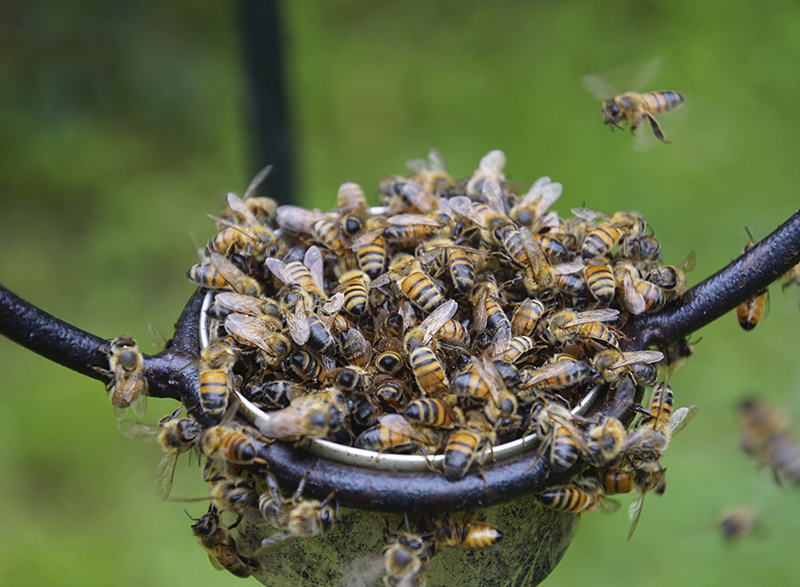 When the orioles are away, the honeybees will play in the grape jelly feeder. Al Batt/Albert Lea Tribune

“Everything is nearly copacetic. My sister Cruella gave me a Fitbit. The neighbor kid goes running every day while wearing it. Pop is particularly cranky today. I’ve been trying to hide the mirrors from Pop, but he found one and discovered that he has become all pants. Still Bill had his wisdom teeth pulled. That means he’s no longer a complete idiot. He came over to help me eat Ma’s cooking. That woman can dish up a heap of vittles worth scarfing down. She can bake, too. Ma hid the cookies in a box of grape nuts to keep us kids from eating them all within a few minutes of them coming out of the oven. My cooking is a comedy. Having to eat it is a tragedy. So eating at Ma’s is heavenly. With or without all his teeth, Still Bill was supposed to help me chase a skunk out of Pop’s small shop, but Still Bill assumed a supervisory position. He thinks that he is accomplishing a lot by not doing anything. I had to roust that skunk all on my own.”

“Did I ever. I had to comb the smell out of my eyebrows.”

The crops looked good, especially the mosquito crop. Toadlets, young American toads, continued to move across the lawn. Lawns were mowed, weeds pulled and insects swatted. I seemed to be at odds with my environment. I decided that a walk on the trail would be wise. Nietzsche wrote, “All truly great thoughts are conceived while walking.”

I hoped for a single mediocre thought.

I invited a friend to walk with the mosquitoes and me on the trail. I told him that it was downhill both ways and added, “I hope you brought plenty of blood.”

A twisting flock of blackbirds flew overhead. Once the breeding season is over for red-winged blackbirds, they gather in flocks.

Evening primrose bloomed in a leafy spike of yellow flowers at the end of the stem, blooming from the bottom up, a few open at a time. In an article in Horticulture magazine, Carol Bishop Hipps described evening primrose this way, “Watching an evening primrose bloom rekindles one’s sense of wonder. As fireflies drift aloft in the summer twilight, a tightly rolled up flower bud shaped like an okra pod begins to swell until it resembles a small yellow cigar. Suddenly the sepals flick back, the ghostly pale petals begin to spring apart, and the eight stamens and the cross-shaped stigma writhe into position. Bud after bud perceptively stirs, then flares open in a performance reminiscent of time-lapse photography. A rich fragrance fills the air, summoning night-flying moths, some of which hover like hummingbirds above the fragile, cup-shaped blossoms, probing for nectar.”

It was a divine stroll down primrose lane.

Michael Katzenmeyer of Fairmont and Jim Knutson of Hartland asked why the dearth of acorns this year. Folklore says that a heavy crop of acorns means a hard winter. I suspect that a lack of acorns foretells a cold, snowy and icy winter, just like every winter. The synchronous, periodic production of large seed crops within tree populations is called “masting.” Ecological data shows that masting is an adaptive reproductive strategy. Predator satiation holds that oak trees starve prospective acorn predators during lean years and overwhelm them with acorns during bumper years. Lean years keep populations of acorn-eating insect, mammal and bird populations low enough so that they can’t eat all the acorns in bumper years. Ecologists site the tendency for synchrony of acorn production among oak trees in the same area as proof. The genes of trees producing acorns out of synchrony with others would eventually be removed from the population by the voracious feeding of hungry acorn predators. Scientists have suggested that the interval between mast years is necessary for trees to recover the energy and mineral reserves from the high-output years. Masting increases the effectiveness of wind pollination. The more trees that flower at once, the better the chance for pollination. It’s an economy of scale that favors large, occasional outputs of acorns rather than frequent, small ones. Acorn production is cyclical. Some studies have shown that white oaks produce bumper crops every five to eight (some say four to seven) years, whereas red oaks have bumper crops every three to five years. This is a general cycle and not absolute. Environmental and biological conditions can severely impact oak mast production during any given year. Heavy insect infestation, spring frosts, wet spring, drought, heavy spring rains, pathogens, growing season floods, land management and unusual temperature extremes could cause poor or failed acorn crops. Acorn production can be a reflection of past weather. The weather at the time of bud formation is critical as it determines whether buds develop into vegetative (leaves) or reproductive (flowers and fruits) structures. Late frosts, high winds, prolonged drought or heavy rains may influence the acorn crop. Other studies found that acorn production dramatically decreased when oaks reached a certain age and/or diameter.

“How can I tell if it’s a red fox or a gray fox?” The key mark on a gray fox is the black tip on the tail. A red fox typically has a white tail tip and looks as if it’s wearing black socks. Gray foxes can climb trees. A fox in a tree is a gray fox.

“Now and then it’s good to pause in our pursuit of happiness and just be happy.” — Guillaume Apollinaire

“Expect everything, I always say, and the unexpected never happens.” — Norton Juster