Al Batt: There is nothing quite as breathtaking as working with cranes 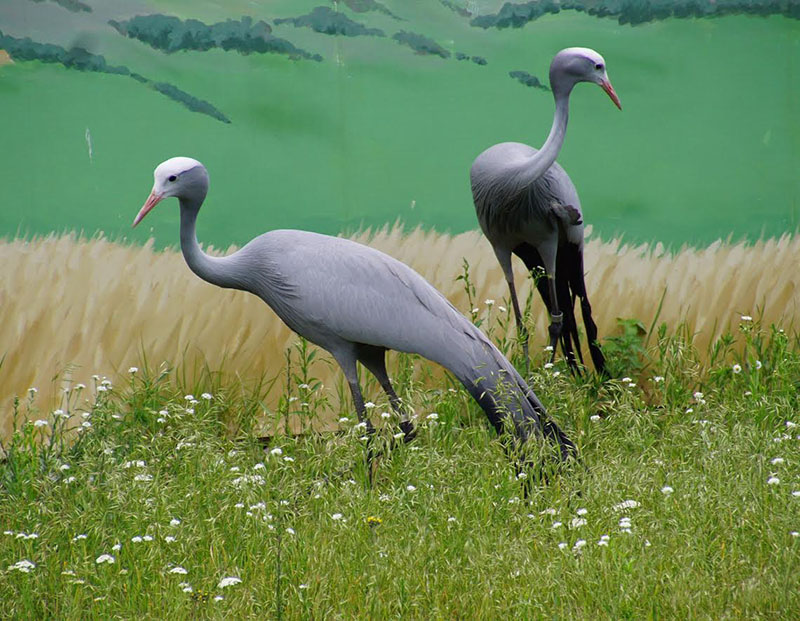 There are 15 species of cranes, including the blue cranes pictured. Provided

“Everything is nearly copacetic. If I had a penny for every train I derailed in my youth, I’d still be poor. I remember Pop being so excited when I went out for cross country and then being disappointed to learn that I’d still be coming home each day. This might be my best day I’ve had since my chia pet bit me. Such a good day that I’d like to teach the world to sing in perfect harmony, but where would I find a rehearsal hall big enough to hold everyone? The dragon tattoo on my rear end is draggin’, but I’ll fix that by having a slice of pizza. If I don’t cut the pizza, the entire pizza is one slice. I went to the mall, sat on the geezer bench and tried to pick out the zombies. Hard to tell them from people worshipping smartphones. Just when I’m prepared for the humdrum rigors of yet another day of slaving away, there is devilment afoot in the neighborhood. Someone, I think it was Harp, sprayed some of that hair-in-the-can stuff on my watermelons. Do you know a barber who will give a haircut to a melon that isn’t human?”

On the trail of nature

I walked the Blazing Star Trail and listened to the warbling vireos sing. They must have formed a choir as I was surrounded by vireo voices. This bird sings well into September. Its song is a rollicking jumble of notes that sounds like, “When I see you I will squeeze you and I will squeeze you till you hurt!” Or something like that.

Hummingbirds flew and fought over jewelweed (spotted touch-me-not), occasionally taking the time to feed on the nectar of the plants. The fruit of jewelweed is a thin pod that pops open at the slightest touch, throwing seeds explosively in all directions, hence the name “touch-me-not.” This is an important nectar plant for hummingbirds and the succulent stems contain a juice that brings some people relief from skin irritations caused by poison ivy or stinging nettle. It is a fetching plant.

The cranes are calling

I’ve worked on the sandhill crane migration along the Platte River near Kearney, Nebraska, in various capacities through the years. It’s a good gig. The migration is breathtaking as more than 500,000 sandhill cranes pass through that area. I’ve seen nesting sandhill cranes with colts (young) where I live. I’ve been to the International Crane Foundation in Baraboo, Wisconsin, many times. The ICF has live birds representing all 15 of the world’s crane species. Cranes occur on five continents, all but South America and Antarctica. The 15 cranes species are sandhill (the most abundant), whooping (the rarest), gray-crowned, black–crowned, blue, wattled, sarus, Siberian, white– naped, black–necked, Eurasian or common, hooded, red–crowned, demoiselle and brolga. Sandhill and whooping are the two North American cranes. Greek and Roman mythology tended to portray cranes as symbols of love, joy and a celebration of life. I love hearing crane voices. The bugles, honks and rattles are both curious and enchanting. They are jubilations with wings. I watch them with glittering eyes.

“Why do so many of the acorns I find on the ground have tiny holes in them?” It’s because of acorn weevils. An acorn weevil has a long snout reminiscent of an elephant’s trunk that it uses to pierce the soft tissue of a developing acorn. A female lays a fertilized egg inside the acorn, turning the acorn into a nursery. After the egg hatches, the larva feeds within the acorn and is capable of consuming the entire nutmeat. When the acorn hardens and turns brown in readiness for germination, it falls to the ground. The larva (grub) chews an escape hole before burrowing into the ground where it remains while developing into an adult. Part of the reason you find so many acorns with holes in them is because the squirrels select the good acorns and leave the wormy ones behind.

“What is the correct way to pronounce “coyote”? There are three ways to pronounce “coyote”: ky-oh-tee, ky-oat, or koy-oh-tay (the Spanish pronunciation). I favor ky-oh-tee, thanks to the influence of the famed cartoon character, Wile E. Coyote. Some people call them song dogs. Lewis and Clark referred to them as prairie wolves. Coyotes are found in every state except Hawaii. Coyotes are persecuted by humans. Our species is convinced that the world needs weeding. As a feeder of birds, a gardener and a long-time raiser of poultry, I welcome coyotes more than raccoons. Dan Flores in his book, “Coyote America,” exposes the urban legend of coyotes eating great numbers of small pets, by saying, “If coyotes were relying on pets as a source of food, we quickly wouldn’t have any pets left.” Bill McKibben, author of “Wandering Home,” wrote, “When the last man dies, a coyote will be howling over his grave.”

“How many different kinds of mosquitoes are there in Minnesota?” There are 51 species of mosquitoes in Minnesota and around 28 of those bite humans. I know, it seems like more. There are days when I’m amazed that anybody or anything wants to hang around me. Mosquitoes fill that niche. They are always willing to keep me company. Each of the biters are locally grown locavores. Here at the mosquito hatchery I call home, the skeeters are flying guard dogs.

The column I wrote for the September/October issue of Bird Watcher’s Digest magazine is about the Pelican Breeze, a praiseworthy pontoon that floats on Albert Lea Lake.

“Ralph Waldo Emerson once asked what we would do if the stars only came out once every thousand years. No one would sleep that night, of course. The world would become religious overnight. We would be ecstatic, delirious, made rapturous by the glory of God. Instead the stars come out every night, and we watch television.” — Paul Hawken

“Life does not have to be perfect to be wonderful.” — Annette Funicello