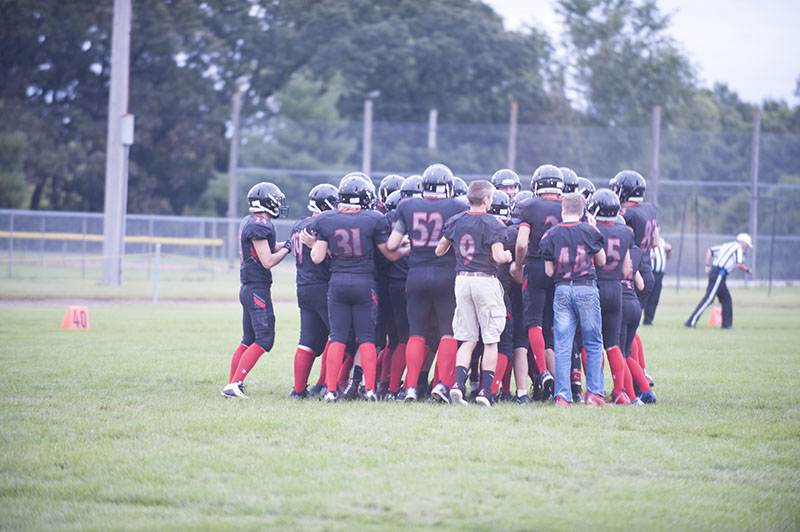 The Alden-Conger/Glenville-Emmons Knights huddle up before the kickoff of their home-opener against Spring Grove Friday night in Glenville. Jarrod Peterson/Albert Lea Tribune

In the Knights’ home-opener, there was a big crowd and the team was fired up after coming off a 44-6 win over West Lutheran the previous week.

However, the excitement slowly dissipated, as Spring Grove took the game over quarter by quarter and wound up with a 55-12 victory over the Knights.

Derek Van Ryswyk got the Knights off to a fast start when he found wide receiver Carter Dahlum streaking down the left side of the field for a 90-yard touchdown with 8:33 remaining in the first quarter.

But from there, it was all Spring Grove and a vicious running attack.

The Knights held with Lions for most of the first half.

A one-yard touchdown run by Brock Schuttemeier and the extra point by Alex Folz gave the Lions a 7-6 lead with just over 6:30 remaining in the first quarter.

Then, Adin Solum picked off Van Ryswyk and, three plays later, Schuttemeier bullied his way into the end zone for his second score.

On the ensuing kick off, Dahlum shook a couple of defenders and brought the ball out to near the 50-yardline, but he was stripped of the ball and the Lions recovered.

The Knights recovered a fumble of their own and, moments later, Van Ryswyk found Dahlum for another huge gain at the end of the quarter.

But the Knights weren’t able to make anything of the drive.

In the second quarter, the Lions started to pull away when they got a touchdown from Cullen Patterson.

Throughout the night, the Lions kept the Knights off balance with a solid running attack and timely passing.

The Lions would grow their lead the rest of the game.

“Believe it or not, this was a positive game for us,” said Knights head coach Chad Mattson. “(Spring Grove) is a top-tier team, and other than the second quarter, which was littered with turnovers, we played them pretty tough.”

Van Ryswyk struggled to find the mark throwing the ball. He completed 7-21 for 188 yards, one touchdown and three interceptions.

Dahlum finished with four catches for 138 yards and a touchdown.

Dalton Bradley was a defensive standout for the Knights. He finished with 15 tackles.

After scoring 70 points in their opener, the Lions offense cooled off a bit with 55 Friday night. They have outscored their opponents 125-20 through two games.

The loss was the first of the season for Knights, who are now 1-1.