Al Batt: Deer are the animals most often reported as being hit by vehicles 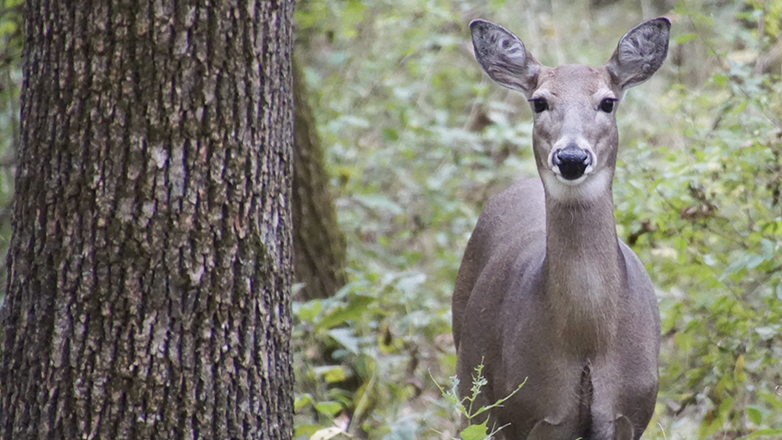 Watch out for deer; they don't all cross the road by the deer crossing sign. Al Batt/Albert Lea Tribune

“Everything is nearly copacetic. My horoscope said that I would try to sleep until the crack of noon, but fail. Then I’d eat, breathe and wish I could back to bed. It was amazing in its accuracy. It even said that I’d be boycotting businesses that sell things I can’t afford. That’s incredible. I saw a miniature collie today. I looked, but didn’t see a miniature June Lockhart anywhere. My gourd crop wasn’t good this year. All I raised were the little dipper and the big dipper. I ate with Weasel at the Eat Around It Cafe yesterday. Weasel needed some caffeine. He isn’t irritable enough without it. Weasel took home a big doggy bag of food.”

“Everything that everybody in the cafe didn’t eat. I took my parents to Minneapolis for a church meeting. Pop is a practicing Lutheran, but Ma is on the national team. The nice thing about the Twin Cities is that they are close to Minnesota. I watched an hour-long TV show that said that Americans are lazy. What a load of hooey.”

“Why didn’t you change the channel?” I ask.

“I would have, but the clicker was just out of my reach.”

Someone needs to take the fall.

I watched a squirrel go from zero to nuts in three seconds. It scurried about madly. It became squirrelly, I suppose.

People notice fewer birds at feeders in late summer and early fall. With the ripening of summer’s vegetation there is an abundance of natural foods. As natural food stocks decline, the birds will return.

My yard bloomed in blue jays and white-throated sparrows. I’d watched Franklin’s and ring-billed gulls feed on earthworms forced from their homes by floodwaters in Waseca. It gave me a sudden urge for gummy worms. I thought of something the football coach, Darrell Royal, said, “If worms carried pistols, birds wouldn’t eat ‘em.”

Kay Boyken sent a photo of a bald eagle catching fish in the flooded parking lot of Godfather’s in Albert Lea. The restaurant reopened and the eagle fishes elsewhere.

“Why are there so many dead skunks on the roads?” A skunk’s sense of smell and hearing are excellent, but it has poor eyesight. Skunks don’t conduct themselves well around cars. Young skunks are dealing with dogs and cars for the first time. You’ll smell the results.

“Why do I see more vultures than I used to?” Their northward movement is likely because the interstate highway system increased the supply of vulture food in the form of roadkill.

“Why do my bird feeders get busy before a storm?” Because birds are hell-bent for weather. Most birds have a middle-ear receptor called the Vitali organ, which senses small changes in barometric pressure. It isn’t named after Dick Vitale, a basketball broadcaster more famous for his mouth than his ears. The birds consider feeders a reliable food source and stock up, just as we do before storms.

“When should I prune oaks?” Trim oak trees in November through February. The main reason for this pruning schedule is the prevention of oak wilt. The sap beetle that spreads oak wilt is attracted to fresh cuts. Pruning is best done when the beetles aren’t active.

“Does peppermint spray repel bats?” People spray it in the hopes of discouraging spiders and mice. I doubt that it works. Mothballs, cinnamon, coyote urine and green tea don’t. I hope it does. At least it gives an attic a pleasant smell.

“The armor on my binoculars is melting. What causes that and how can I stop it?” I suspect it’s a result of contact with mosquito spray (DEET). I provided binoculars for bird walks I led and one of them became sticky. I tried the usual things–ignoring the binoculars, pretending they didn’t exist and washing them in Murphy Oil Soap. Talcum powder made for lovely white binoculars, but didn’t help. Lemon (orange works, too) essential oil did the trick and the binoculars smell terrific.

“How do I get a bat out of my living room?” Attics provide bats the high temperatures and undisturbed environments needed for resting, birthing and rearing young. Young bats sometimes take wrong turns and end up in living areas of a home. They don’t want to be there just as much as you don’t want them there. They won’t fly at you or get in your hair. If you open doors and windows and turn off the lights, the bat will generally find its way outside. Put a box over a landed animal and slide a piece of cardboard underneath. Release the bat by placing it on a raised area outside as bats have difficulty taking flight from the ground.

“What animal is hit most often by cars?” It’d be an insect. Not sure which species. Many birds are hit — swallows might be the one I see most often. Research published in The Journal of Wildlife Management showed that 89 million to 340 million birds suffer fatal injuries from vehicle encounters annually. Deer are the animal most often reported as hit by vehicles. State Farm Insurance estimates that more than 1.2 million deer, elk and moose — mostly deer — were struck in 2015 in the United States, with a West Virginia driver having a 1 in 41 chance of hitting a deer.

“Happiness is a direction, not a place.” — Sydney J. Harris