Al Batt: Is the myrtle warbler basically the same as the Audubon warbler? 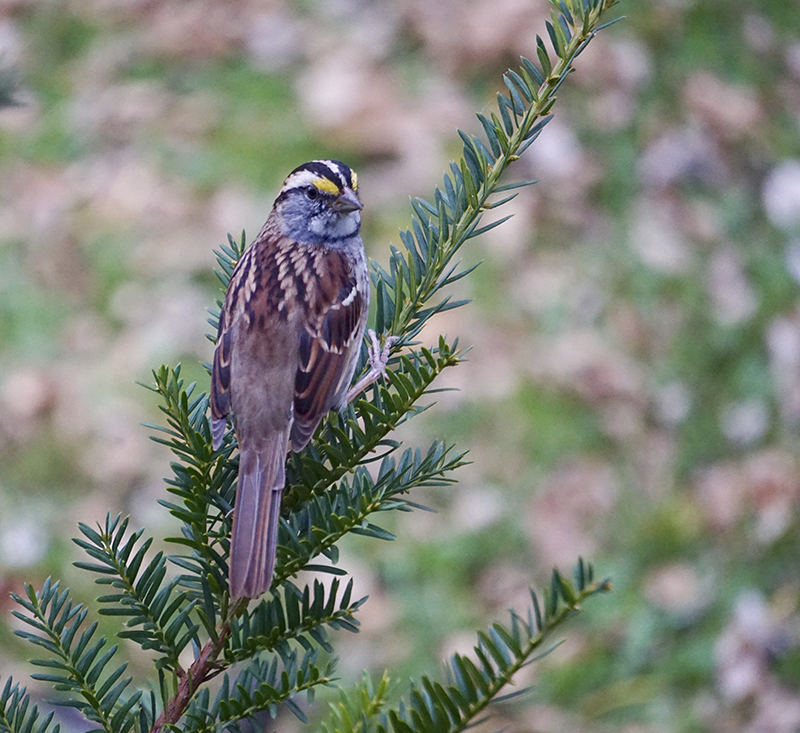 The white-throated sparrow can be identified by its facial markings. Al Batt/Albert Lea Tribune

“Everything is nearly copacetic. I went to the Liars’ Club Meeting. There wasn’t anyone there. I don’t know why I ever believe those guys. I’ve been helping out at the Lord of the Pies Bakery. I love all the rolls and doughnuts they make. They’re all natural foods. They’re what man was meant to eat. After all, fingers were made before forks. I think the bakery may work too hard at trying to make dough out of dough. Their answering machine’s message is this, ‘What!?’ I chase cream around the block for them.”

“Yeah, that’s how they make a cream puff. I ran so fast that it was a full minute before my shoes caught up with me. I had to do the running because the head crumb at the bakery gets shin splints from playing checkers. He couldn’t get out of his own way. He’s as bald as a bowling ball. He came out to the farm one day and picked up a handful of cow manure and rubbed it on his head. I asked if that was supposed to grow hair. He said, ‘I don’t know, but it stops me from biting my fingernails.’”

I imagined a loud voice constantly declaring, “Welcome to Autumn World. Enjoy the raking of the leaves ride.”

I dragged things here and there across the lawn. If you live in the country, there is always something that needs dragging. A small critter scurried through the fallen leaves. It was a furry-no-worry that allowed only a brief glimpse. A mouse of some sort busily doing whatever a mouse of some sort does,

It was a Goldilocks day. Not too hot. Not too cold. It was just right for both a man and a mouse of some sort.

“I saw a monarch butterfly on a chilly day. At what temperature is a monarch unable to fly?” If a monarch’s body temperature is below 55 degrees, it cannot fly. As a general rule, monarchs need an air temperature of at least 50 degrees on a sunny day (or 60 on a cloudy day) in order to take flight.

“I’ve seen so many egrets this year. Where do those big white birds go from here?” The great egrets winter in the Gulf Coast states, Mexico, Central America and the West Indies.

“I’ve noticed that the white-throated sparrows in my yard have heads of different colors. Is that normal?” Yes, and those colors impact mate choice. Some of the birds have primarily white and black feathers in the median and lateral crown stripes of their heads. Others have primarily tan and brown crown stripes. The two forms are genetically determined. Individuals almost always mate with a bird of the opposite morph. Males of both color types prefer females with white stripes. Both types of females prefer tan-striped males. White-striped males blame their parents for this. White-striped birds are more aggressive than tan-striped ones. White-striped females may out-compete tan-striped females for tan-striped males. Male birds that insist on wearing hats are unlucky in love.

“Do sunflowers follow the sun?” The leaves and buds of young sunflowers exhibit heliotropism (sun turning), but mature sunflower heads typically face east and don’t move. Research has showed that eastward-oriented flowers are warmer than westward-oriented flowers. This warmth attracts pollinators, suggesting that there is a benefit to plants chasing the sun.

“I went birding with you and you pointed out a flicker that had red feathers where they should have been yellow. Could you explain why the color difference.” Sure. For years, it was believed that such a flicker was an intergrade between a red-shafted and a yellow-shafted flicker. An intergrade shows mixed characteristics caused by interbreeding of various subspecies. A more plausible explanation for the red feathers is that the bird had fed upon berries containing a substance with an abundance of carotenoid pigments that caused the red hues.

“Is the myrtle warbler the same as the Audubon’s warbler?” Yes and probably no. A study published in The Auk found genetic evidence that the yellow-rumped warbler — fondly nicknamed the “butterbutt” — may be at least three separate species. For most of the last century, the yellow-rumped warbler was two species, the myrtle warbler of the east and the Audubon’s warbler of the west. In 1973, evidence that the two species hybridized led scientists to reclassify them as a single species. DNA evidence now suggests that myrtle and Audubon’s are separate species, and so is a third, almost entirely restricted to Guatemala — the Goldman’s warbler. Yellow-rumped warblers breed farther north than any other North American warbler due to their ability to digest the fruit of wax myrtles and bayberries. A myrtle has a white throat and an Audubon’s has a yellow throat.

“Why shouldn’t I release goldfish into lakes?” Goldfish, members of the carp family, uproot vegetation at the bottom of lakes and streams, disturbing sediment and releasing nutrients that trigger excess algae growth. They transmit exotic diseases and parasites. They eat the eggs of native fishes and produce more eggs than most freshwater fish species.

Someone placed a sign reading, “In case of chili, break glass” over the church’s fire extinguisher. That can mean only one thing. It’s time for Cross of Glory’s annual (sometimes yearly) soup and pie supper. Come to Hartland and eat from 4:30 to 7 p.m. Nov. 2 — you don’t have to eat the entire time — and then leave. Your stomach will thank you. So will I.

“Be a fountain, not the drain.” — Rex Hudler