Al Batt: What do loons eat? Are there chiggers in the state of Minnesota? 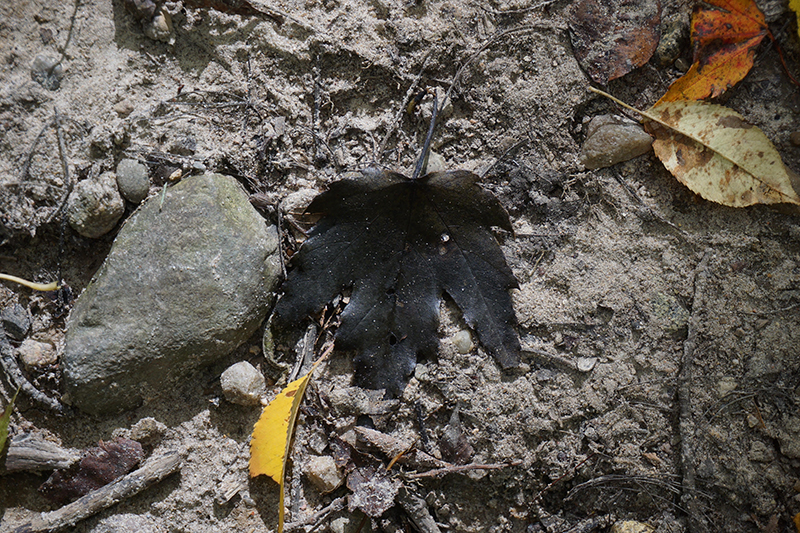 One can only hope that a black leaf crossing their path brings good luck. Al Batt/Albert Lea Tribune

“Everything is nearly copacetic. I’m starting my pick-your-own-rocks from my fields enterprise just as soon as the crops are in. That’s the time of the year when I have to put wake up on my list of things to do. The only gas I’d get today for the same price that I paid for a gallon when I first started driving, would be from a single radish. I’ve complained about the price of gas so much that the local farm cooperative elected me to its board just to shut me up. That’s a case of the empty gourd rattling the loudest. That’s how all big-time CEOs get their jobs. Not long after that election, Weasel picked me up and we went to Bonnie and Clod’s orchard and bought some Honeycrisp apples. I’d just polished off one of our state apples when I asked Weasel, ‘It’s hard to believe that I’m on a board that makes so many wise decisions, isn’t it?’ Then I tossed the apple core out the window. Or I would have if the window had been open. The core smacked against the glass and fell to the floor of the car. Weasel gave me a scornful look and replied, ‘Yes, it is.’”

I was driving home late at night. I was doing an unintentional windshield test. I could see how many insects were flying at the time by the number of splatters on my windshield. It was both a good night and a bad night to be an insect. The old joke asked what was the last thing to go through an insect’s mind when it hit the windshield. The answer was its rear end. Flying insects hate that joke.

My yard is filled with giving trees. They are giving leaves. Dropping leaves do cannonballs from the branches. I’m sure they are saying “Whee!” at a pitch too high for the human ear to hear. Perhaps there is an occasional “Geronimo!”

Red-breasted nuthatches are visiting my yard. I hear their nasal calls frequently and I enjoy their company.

“What do loons eat?” In the movie, “On Golden Pond,” they ate up whatever the characters played by Henry Fonda and Katharine Hepburn said. Common loons are expert anglers with a corresponding diet consisting of mostly fish, particularly perch and sunfish on northern lakes. If fish are scarce or the water too murky for fishing, they catch crustaceans, leeches, snails and aquatic insect larvae.

“Are there chiggers in Minnesota?” There are. I’ve found them. They like me. I taste just like chicken to them. Their bites get in all kinds of places on my body. Chiggers go boldly where no one has gone before. These juvenile chiggers are larval forms of a mite. They don’t drink our blood or burrow into our skin, but they do have a taste for dissolved body tissues. Chiggers like heat and humidity. Tall grass, moist areas around lakes or rivers, and wooded areas are likely to harbor chiggers. The bites of chiggers (called red bugs by some) itch enough to keep a mind preoccupied and covering them with nail polish doesn’t help. The best thing I can do to take my mind off the itching is to cause an intentional earworm, forcing a song to be stuck in my head. “It’s a Small World” works great.

“Do monarch butterflies migrate at night?” Monarchs don’t migrate at night. They have no source of heat (radiation) to keep their muscles working. Tail winds–winds blowing in the same direction as the monarchs are traveling–are stronger during the day and are the key to fast and efficient migration. Monarchs become disoriented in the dark. Any flying done at night is likely due to the wind blowing the butterflies out of control.

“Do all monarch butterflies winter in Mexico?” No. If a monarch butterfly spent the summer west of the Rocky Mountains, it travels to the groves of Monterey pine, eucalyptus and cypress found along the coast of California. Those summering east of the Rocky Mountains migrate to the Sierra Madre Mountains west of Mexico City, where they roost on oyamel fir trees. There are monarchs that winter in Florida.

“Are there monarch butterflies in Alaska?” No, Alaska has no native milkweeds.

“Do the monarch butterflies mate here before migrating south?” They do not. Beginning in mid-August here, adults are in diapause when they emerge from the chrysalis. Diapause is a period of suspended development and growth accompanied by decreased metabolism. These monarchs are full-grown, but not reproductively mature. Their reproductive development is on pause. They will not complete their development or begin to mate until next spring in Mexico. Most monarchs arrive in Mexico in early November.

“Are there other milkweeds that I could grow?” Sure, other than the common milkweed, you could grow swamp milkweed and butterfly-weed. Swamp milkweed grows well in the sun in moist, clay soil. It has pink to red flowers. Butterfly-weed does well in the sun in dry, sandy soil. It produces orange flowers. Both plants bloom in June–September and are host plants for monarch butterfly caterpillars.

Please stop by for some fine food and to say hello to my long-suffering wife and me at the annual soup and pie supper from 4:30 to 7 p.m. Nov. 2.

“Success consists of going from failure to failure without loss of enthusiasm.” —Winston Churchill

“The mirror is my best friend because when I cry it never laughs.” — Charlie Chaplin