Memorial services for Louetta Mae Denzene of Albert Lea will be at 2 p.m. Saturday at United Methodist Church in Albert Lea. The Rev. John Mitchem will officiate. Interment will be in Graceland Cemetery. Friends may visit with family one hour before the service at the church. 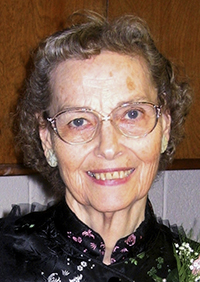 Louetta was born Aug. 29, 1926, in Milford Township, Ohio, the daughter of James and Nina (Manon) Beerbower. She finished high school and went on to earn a teaching degree at the University of Michigan. She met her husband, Georges C. Denzene, in the college library and they were united in marriage Aug. 26, 1946.

Throughout her life, Louetta had a faith that never waivered. Every interaction she had with others was about showing them God’s gracious love. She never had a bad word to say about anyone and strangers she met would soon become people she named as friends. You may have known Louetta as a consummate gardener, quilter, seamstress, cook, hostess, housekeeper or visitor to the sick and homebound. In all of those things, she forever strove to take care of others. She had a huge capacity for love. For years, her sign-off on a phone call to the family was not “goodbye,” but rather “hugs and kisses all around!”

Louetta will be greatly missed by her sons Quentin (Sherrie) and Jonathan (Iris); daughter, Suzanne Schultz (Paul); grandchildren Robynn (Mike), Kristin (Matt), Arthur (Keith) and Duncan; great-grandchildren Eleanor and Eliza; and all of the many people she touched with her loving spirit.

Louetta was preceded in death by her husband, Georges; her parents; her three siblings; and 13 aunts and uncles, with whom she is now joyfully reunited.

Memorials are suggested to United Methodist Church of Albert Lea, where Louetta was a devoted member for 60 years. “Hugs and kisses” to you, Lou!