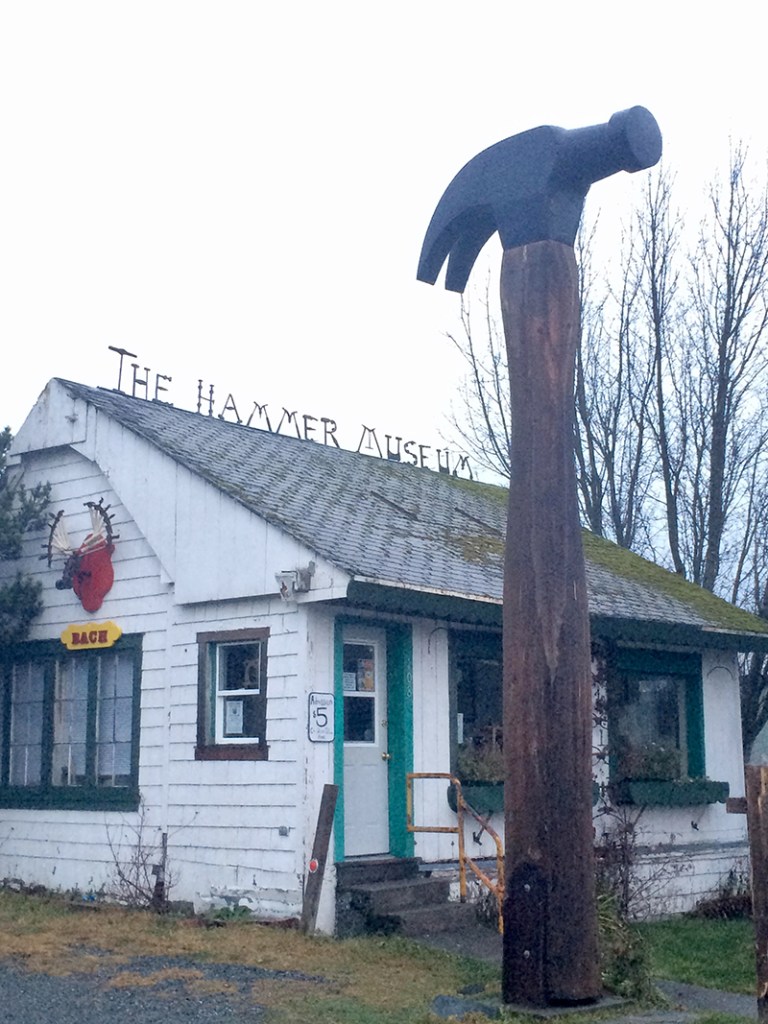 Life is a jack-in-the-box.

A jack-in-the-box is a children’s toy that consists of a box with a crank. When the crank is turned, it plays a melody, often “Pop Goes the Weasel.” There is a surprise when the tune ends. The lid opens and a figure, usually a jester or a clown, pops out of the box.

I was multi-tasking in Haines, Alaska. I was both walking and looking when something jumped out at me. It was the Hammer Museum, easy to find because of the 20-foot tall hammer outside its door.

I like odd things. Birds of a feather flock together. As a woman said to my wife, “Your husband is nice, but how can I say this in a kind way?”

There are odd and interesting museums dotting this fine country. The New England Maple Museum in Vermont pays homage to maple syrup. A sweet place to visit. The Mutter Museum in Philadelphia offers a guest (Are we a guest if we pay to get in?) a glimpse at parts of Albert Einstein’s brain. Even in its current condition, his brain would do better than mine in calculus. The National Mustard Museum in Wisconsin has over 5,800 kinds of mustard, enough to cover the Oscar Mayer Wienermobile. In 1986, shortly after the Boston Red Sox had lost the World Series, Barry Levenson went to a grocery store, to walk the aisles and confront his sorrow. As legend has it, he walked the condiment aisle and heard mustard’s voice say, “If you collect us, they will come.” What could he do? He did the only thing a reasonable man could do. He vowed to amass the world’s largest collection of mustards. For those wanting further edification, a diploma is available for a few bucks from Poupon U, a college for mustard lovers.

In Texas, you’ll find Bryan Smith’s Toilet Seat Art Museum. The International Cryptozoology Museum is in Maine. Cryptozoology is the study of animals whose existence is unsubstantiated. This museum concentrates on such things as sasquatch, chupacabra, Jersey devil, mothman and jackalope. There is a Moist Towelette Museum in Michigan and a number of toaster museums around the country because man doesn’t live by bread alone. He needs toast, too.

Growing up on a farm, I thought I could fix anything with a hammer. When all you have is a hammer, you tend to see the whole world as a nail. If at first I didn’t succeed, I got a bigger hammer.

A crusty neighbor told me of a rascal who just needed a sympathetic pat on the head–with a hammer.

I took a delightful mythology class in college. Thor’s Hammer is one of the best-known symbols in Norse mythology. Thor was the god who guarded Asgard, the celestial stronghold of the Aesir, a tribe of gods and goddesses. The giants, forces of chaos, tried to destroy Asgard. It was Thor’s job to prevent them from doing so.

I had no choice. I had to go in. With pounding heart, I entered the Hammer Museum. It was hammer time. It’s a wonderful place for those who have ever pounded a nail or wanted to pound one.

The Hammer Museum, opened in 2002, has 2,000 hammers on display and 8,000 hammers in its collection. They were old, odd, outlandish and outstanding. If you’ve seen one hammer, you haven’t seen them all. Not only claw, ballpeen and sledge, but also hammers ranging from bung, glass, autopsy, check-canceling and foot massage to Tim Allen’s from the TV show, “Home Improvement,” but no M.C. The oldest hammer is a stone ball made of dolerite that was used around 2500 BC by Egyptians in the building of the third pyramid at Giza.

Hammers help us understand history. The first tool used by man was more likely a hammer than a remote control. Each hammer comes with a story well-told.

More information can be found at hammermuseum.org

I left with that good feeling that comes from time well-spent.