Al Batt: Why do crows roost together in winter? How long do squirrels live? 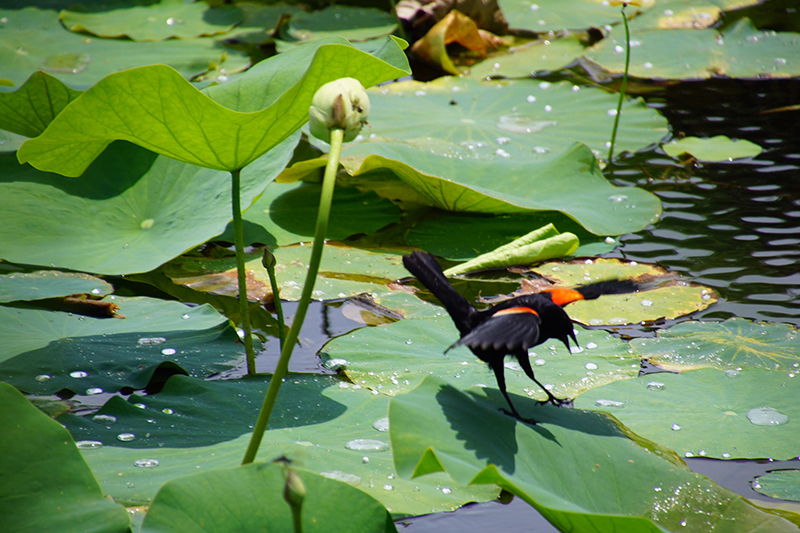 A red-winged blackbird comes in for a landing. - Al Batt/Albert Lea Tribune

“Everything is nearly copacetic. I had a great Halloween. It was like taking candy from a baby. Try this. Think of a number between one and 100. Add 37 to it and then multiply it by 63. Subtract 14 and close your eyes. Dark in there, isn’t it? I woke up early today and made my first mistake of the day. I got out of bed. I figured as long as I was up, I might as well have breakfast. I went to the Eat Around It Cafe for their greasy buffet. It slides down easy. I ate a hearty breakfast — bacon, sausage, ham, hash browns, corn beef hash, fried eggs, pancakes, toast and a sweet roll. It was so good that I decided to have lunch. I went through the buffet again. I had the same thing except I replaced the ham with bologna and the pancakes with waffles. It was good. I made an executive decision to fill my daily dining obligations right then and there. I ate the same stuff plus blueberry scones for dinner. I had a lot of work to do, but I took a nap. I wasn’t that tired, but I’m trying not to work after dinner.”

A long, twisting flock of blackbirds flew overhead. They filled the air with bird music. Most of them were red-winged blackbirds, but there were some European starlings, common grackles and brown-headed cowbirds mixed in. One winter flock in the Great Dismal Swamp on the Virginia and North Carolina border was estimated to contain 15 million blackbirds. There is safety in numbers. A flock is like a wagon train. A flock provides more eyes and ears to search for food and to watch for predators, increasing the chance of an individual bird surviving. Hawks sometimes attack flocks of flying birds, but the raptors often fail to capture even one after the flock closed ranks to form a mass that the hawks were unwilling to penetrate for fear of being injured.

I watched the flock go by. I ascertained their number by counting the legs and dividing by two.

“How many squirrels live past a year?” There are many variables, but I’d hazard a guess that it’s about 25 percent.

“Why do crows roost together in a tree during the winter and how many can be in a roost?” There are a number of theories as to why crows flock together at night. One is that the birds congregate in a favorable spot. Maybe it’s a busy hotel because it’s the only suitable tree. It might offer protection from predators and the elements. There is safety in numbers. A flock could offer some protection from owls. The roost might be in an area where information about successful foraging areas could be shared. A hungry individual could spot a well-fed crow and follow it to a good food source. The roost could be located near a reliable food source. That way, food is available at the beginning and the end of the crow day. Landfills, agricultural fields and composting sites fill that bill–or bills. A roost in Fort Cobb, Oklahoma was estimated to hold over two million crows and a roost in Nebraska had more than a million individuals. They roost in cities because cities are warmer than rural areas, the artificial lights make it easier to spot owls and there is no hunting allowed within city limits.

“Why don’t I see many dead birds?” Many birds die from hunger or predation before they leave the nest. Adults die from disease, accidents or fall prey to predators. Dying birds seek what they consider a safe place to hide until they recover or die. Mother Nature runs a tidy household. Scavengers, such as vultures, crows, coyotes, rats, ants, beetles and others make quick work of a dead body.

“What are the spiny cucumber-shaped things draping over trees?” The wild cucumber has branching vines that reach lengths of 15 to 25 feet. Wild cucumber foliage has star-shaped leaves each with five to seven pointed lobes. The flowers are evident in July to September and are pale white to greenish-white. Male flowers form clusters, while the inconspicuous female flowers occur singly or in pairs. This plant grows in wet to moist river bottoms, stream banks, thickets, roadsides and woods. The fruits are attached to the vine individually and each fruit is a green, inflated, egg-shaped capsule 1 to 2 inches long that is covered in soft prickles. It contains four seeds. Bur cucumber leaves are more shallow-lobed and the flowers have five petals. The fruit is smaller and contains only one seed.

“What is leucism in a bird?” A bird’s plumage lacks melanin, making it look diluted or faded. Leucism usually affects a bird’s dark feathers more than its lighter colored feathers. Leucistic birds can show bright colors–oranges, reds and yellows. Feathers that should be black or brown are a pale gray or white instead. Some leucistic birds lose all the pigment in their feathers and appear white. Albino birds have no color in their feathers, skin or eyes. They have reddish to pale pink eyes, legs, feet and bill. Leucistic birds commonly have normal colors in their eyes, legs, feet and bills.

“A fool sees not the same tree that a wise man sees.” — William Blake

“The more one judges, the less one loves.” — Honore de Balzac