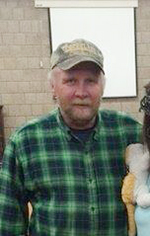 Dale graduated from Wells-Easton High School in 1971. He was united in marriage to Barbara Pitcher on Nov. 17, 1978, and to this union three children were born. The couple later divorced.

Dale worked as a machinist at Progress Casting from 1987 to 2009, and also worked for Johnson Farms in Bricelyn. He was a member of the Wells Rifle & Pistol Club, Volunteer Firearms Safety and the NRA. He enjoyed target shooting, archery, fishing and attending sportsman’s shows. He also enjoyed antique power and threshing shows with his brother, Randy. He loved playing with his dog, Chester. Dale was an avid reader, story writer, gardener and tinkerer. He especially loved spending time with his grandchildren, and teaching them many things. Dale said that if he knew grandchildren were so much fun, he would have had them first!

He is preceded in death by his parents and his best furry son, Buddy.