MINNEAPOLIS — If there has been a consistent factor over the past four years of dominance by the Grand Meadow football team, it has been the Superlarks’ running game and their defense. GM, which now has 50 straight games, stepped up in both of these categories as it knocked off Cleveland-Imanuel Lutheran 41-21 in the state nine-man title game in U.S. Bank Stadium Friday. 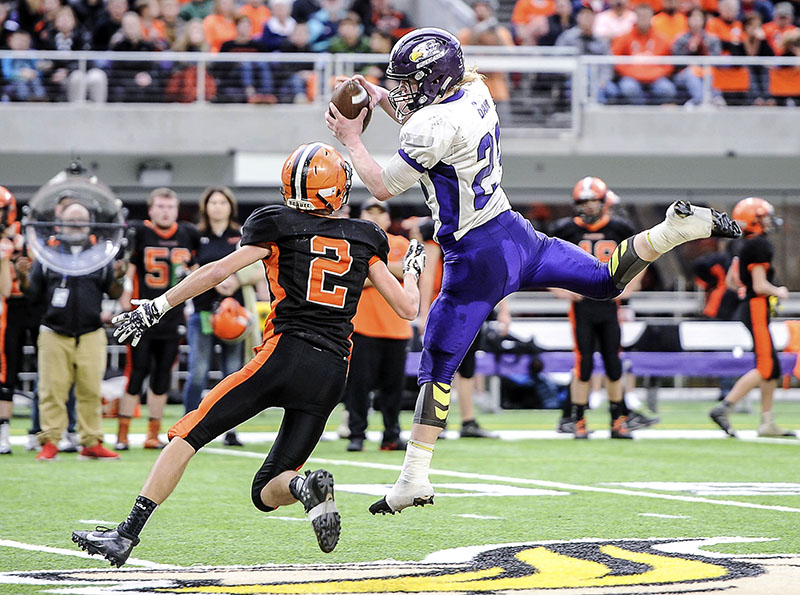 GM’s Christophor Bain piled up 277 rushing yards and four touchdowns, and the Larks allowed just seven points in the second half as they put the stamp on their fourth straight state title.

Bain opened the second half with a 78-yard TD run behind key blocks from Connor King and Kyle Oehlke to put the Larks up 27-14.

“They didn’t have to just stop me, they had to stop everyone else. The offensive line did an amazing job of opening holes in the second half,” Bain said.

The Clippers (13-1 overall) were able to stay in the game due to a big play passing attack as Carter Kopet threw first half TD passes of 59 and 61 yards to keep his team within six points at the break. But in the end, Cleveland couldn’t match GM’s physicality up front. Kopet was sacked twice and he was forced to throw on the run several times in the second half.

“They hunt for contact,” Kopet, who threw for 238 yards three TDs and ran for 42 yards, said of GM. “The biggest thing that separates them from the rest of nine man football is their weight program. They’re huge.” 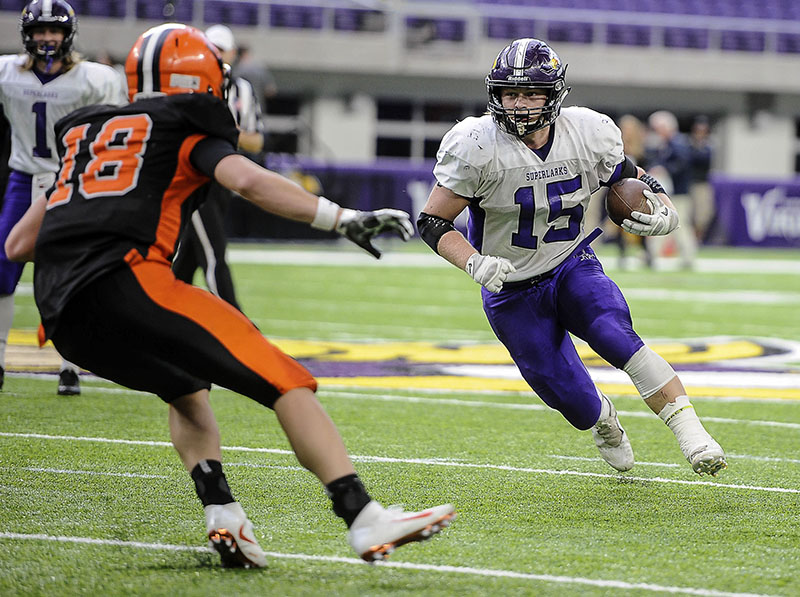 GM head coach Gary Sloan said the Larks knew they had to focus on the ground game in the second half, even when Cleveland showed it could make big plays. After Bain’s big run to start the third quarter, GM forced a Cleveland three-and-out that set up a seven-yard Bain TD run that made it 34-14 GM with 6:39 left in the third.

“I thought the third quarter was really important. We established our ground game a little bit and we got away from them and started running the clock. When we get a lead we think we can wear people down and make them tackle us,” Sloan said. “It was a great game. I’m so impressed with Cleveland. There were times when we thought we were maybe a little bigger or stronger than them, but they brought so much effort and such intensity.”

GM was able take an early 14-0 lead due to the play of senior Wes Ojulu. Ojulu had an interception at GM’s 10-yard line on Cleveland’s opening possession and he also broke up a pass that would’ve been a big Cleveland TD on the Clipper’s second possession. Ojulu also put the Larks on the board when he caught a 24-yard TD pass from Brenn Olson to make it 7-0 with 4:56 left in the first quarter.

“Winning never really gets old. We’ve had a lot of games this year that were blowouts and those aren’t really the fun games. Games like today are the fun ones,” Ojulu said. “(Kopet’s) a really good quarterback, not only throwing but running. We had to key on him a lot, but they had other good players too and we couldn’t sleep on them. One way or another they were going to make plays. They’re a good team.”

Bain’s four touchdowns on the day put him atop the all-time GM list. Bain finishes his career with 99 career TDs, which put him past his former teammate Landon Jacobson, who had 97 career TDs. Jacobson now plays football at Winona State University.

“When (Jacobson) was the starter here I was his fullback and I always watched him to learn what he does and try to get one step better,” Bain said. “He’s helped out a lot.”

Winning 50 straight games and four straight state titles, while playing in five straight title games, is a huge accomplishment for GM. They’ve won games all around the state, including Marshall, St. Cloud and Rochester, and they’ve also won titles in three different football stadiums — The Metrodome, TCF Bank Stadium and U.S. Bank Stadium. Through it all, the Larks haven’t allowed themselves to look ahead and Sloan credited his assistant coaches for that. 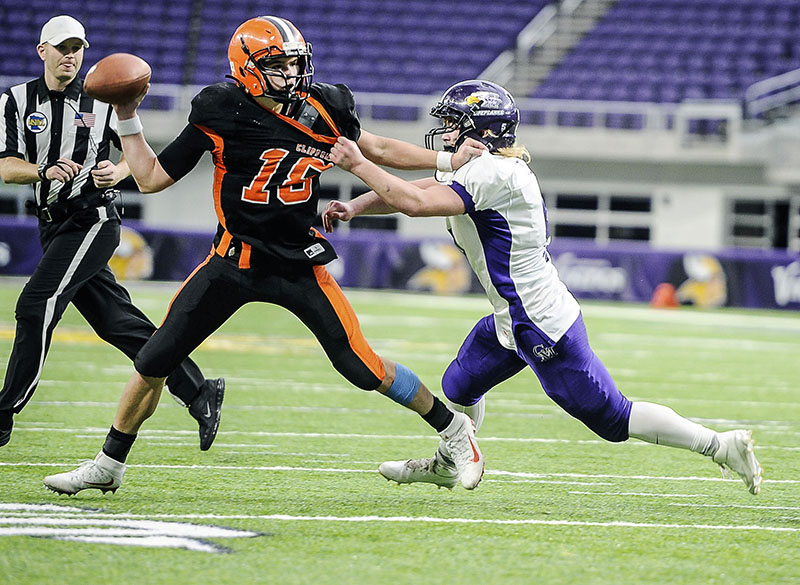 “Our coaching staff is outstanding and I would put them up against anybody,” Sloan said. “Every game that we go into I think our players expect to win. I don’t say that to be cocky, I think they just do what the coaches taught them.”