An Owatonna man is facing prison time after allegedly stunning  a woman with a Taser last week in Albert Lea.

Ryan Steven Theissen, 33, was charged with one of count second-degree assault and two counts of first-degree burglary Friday in Freeborn County District. 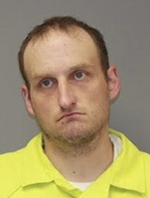 Court documents state the alleged victim reported she had been sleeping Thursday at a residence when Theissen stunned her with a Taser. She said she left the door unlocked, but she did not give Theissen permission to enter the residence.

The alleged victim was reportedly a friend of Theissen’s ex-girlfriend.

After using the Taser on the alleged victim the first time, Theissen allegedly sparked his Taser a few more times and demanded to know where his ex-girlfriend was.

Court documents state that after Theissen demanded she go with him to find his ex-girlfriend she went outside with him and told some neighborhood boys to call the police.

The boys reportedly told an officer that they had seen Theissen arrive in a black SUV and walk quickly and angrily into the residence.

Court documents state the boys said they then heard yelling or screaming inside the residence, before they saw Theissen and the alleged victim yelling at each other in the front yard, and they reported she told them to call the police.

Court documents state in a Mirandized statement Theissen said he had lost his wallet while his girlfriend and alleged victim were at his house earlier in the week. He said he had tried to get ahold of them, and he came to the residence after he learned that the alleged victim was at her father’s house.

Theissen claimed she attacked him after telling him he could come in, and he admitted that he shocked her with the Taser once in the chest, after she reportedly ran at him while swinging.

Theissen’s next court appearance is scheduled for Nov. 10.