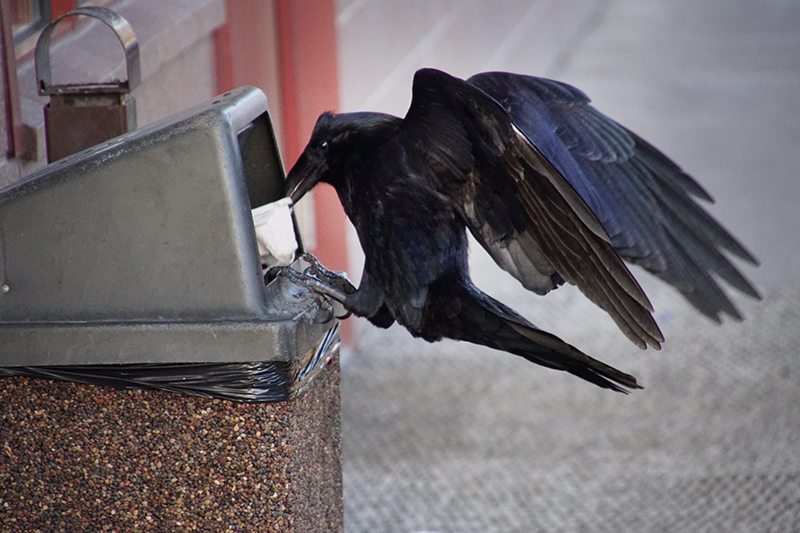 A raven raids a trash bin outside a McDonald’s in Juneau, Alaska. - Al Batt/Albert Lea Tribune

“Everything is nearly copacetic. I’ve begun driving as slow as Pop. It must be a family thing. I have a cousin who drives slower than a snail slimes. In a 100-mile drive, he had to stop twice to make car payments. The kids zoom by me, hurrying to school so they can get a good parking place. Kids, please don’t have your lips pierced. You’ll spend enough time drooling without that. That’s a public service announcement. I got a speeding ticket once. I was driving under the influence of too much coffee and an oversized bran muffin. Maybe the good old days really were? I don’t expect much out of life. I just don’t want any less than that. I need toast. I had to buy a new toaster. They just don’t make things like they used to.”

“Thank goodness,” I say. “When we were kids, putting 100,000 miles on a car was reason for a celebration. Now it means that the vehicle is barely broken in.”

“Oh, yeah? I still have that electric razor I got as a high school graduation present.”

It had put the chimes to work. The wind had gotten its second wind and blew until it could blow no more. Then the aging day became peaceful and hushed.

A crow flew over as darkness neared. In the quiet of the day, I could hear each wingbeat as it sliced through the air. The crow had come from an area where the rubber meets the roadkill. The crow had caws that it supported.

“Where do opossums stay?” Virginia opossums live in woodlands and agricultural areas in all of Minnesota except the far north. The opossum’s naked ears, nose and tail are susceptible to frostbite. They spend their days in hollow logs, holes in trees, dens in the ground, brush piles or under buildings. Opossums do not dig, so they inhabit holes that created by other animals such as groundhogs. They line their dens with dry grass and leaves. Some opossums travel considerable distances at night. When threatened, opossums click their teeth and growl, but when cornered, they may fall into a deathlike state and secrete a foul-smelling scent. This is called “playing possum.” We’ve all done it. Opossums are opportunistic omnivores, eating fruits, worms, snakes (opossums are resistant to the venom of poisonous snakes like rattlesnakes), eggs, nuts, rodents, snails, slugs, birds, grains, pet food and garbage. They are the sanitation workers of the wild, but because of an appetite for roadkill, they are often killed by automobiles. Opossums have a remarkable ability to not only find food, but to remember where it is. Opossums are better at this than rabbits, rats, cats and dogs. Aunt Ingeborg had an opossum that visited her front porch steps nightly to feed upon the food she’d put out for her pets. Ingeborg looked forward to the animal’s visits.

“Do goldfinches eat insects?” Goldfinches are strict vegetarians that only inadvertently swallow an occasional insect. They eat little more than seeds, favoring those from composite plants such as sunflowers, thistle, asters, dandelions and zinnias. They also feed upon the seeds of grasses and trees. At feeders, goldfinches prefer nyjer and sunflower.

“What is the airspeed of an unladen swallow?” What do you mean? An African or a European Swallow? This question and answer is a classic bit from the movie, “Monty Python and the Holy Grail.” The scene went like this as King Arthur and his knights attempted to cross the Bridge of Death.

Bridgekeeper: “Stop. Who would cross the Bridge of Death must answer me these questions three, ere the other side he see.”

Several knights fail to answer correctly and are cast into the Gorge of Eternal Peril.

Bridgekeeper: “Stop. What is your name?”

King Arthur: “It is Arthur, King of the Britons.”

Bridgekeeper: “What is your quest?”

Bridgekeeper: “What is the air-speed velocity of an unladen swallow?”

King Arthur: “What do you mean? An African or a European swallow?”

Bridgekeeper: “Huh? I don’t know that. (He is thrown over the edge by his own spell.) AUUUUUUUGGGGGGGGGGGHHH!”

Sir Bedevere the Wise, as he and Arthur cross the bridge: “How do you know so much about swallows?”

Arthur: “Well, you have to know these things when you’re a king, you know.”

“What do northern flickers eat?” They are mainly ground feeders. They eat ants, caterpillars, crickets, grasshoppers, spiders, berries, seeds and nuts, among other things. The male flickers in this area sport black mustaches.

“Does an opossum have good eyesight?” I watched one feeding under the birdfeeders in my yard. Sniffing the ground, the animal walked headfirst into the pole of a shepherd’s hook. Opossums lack good vision and do not have strong hearing abilities, but their sense of smell is keen.

The Albert Lea CBC will be Dec. 31. Anyone who is interested in counting birds may email Mike Majeski at mmajeski@eorinc.com

“Of all the paths you take in life, make sure a few of them are dirt” — John Muir

“It’s amazing how a little tomorrow can make up for a whole lot of yesterday.”— John Guare