Al Batt: Why do some birds sing during winter? Why aren’t raccoons popular? 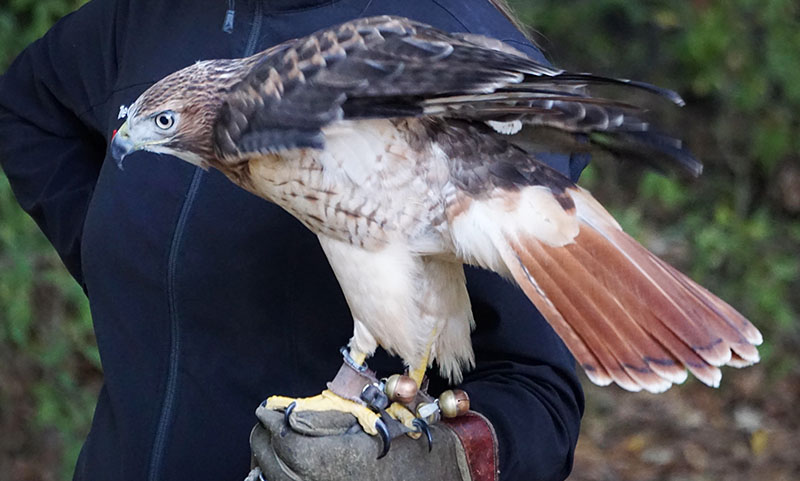 A red-tailed hawk perches on the arm of a handler. - Al Batt/Albert Lea Tribune

“Everything is nearly copacetic. I’ve realized that I’ve been struggling with a lack of interest, compounded daily, for many years. I had one foot in the bathtub and one foot out of the bathtub this morning. I couldn’t remember if I was getting in or out of the tub. I know that your mother-in-law loves those chocolate-covered potato chips. I tried to find her some. I went into one store just to look for them–Victoria’s Secret. No potato chips there. Pop thought about getting some hearing aids, but he decided against them. He claimed that he’s never heard a conversation worth $4600. My sister Cruella and I stopped to see Still Bill. He holds onto his dreams by hitting the snooze button. Still Bill showed Cruella a fur glove that he’d made. Cruella felt it and said that it was the softest fur she’d ever encountered. Still Bill smiled and said, ‘Yup, that’s from the biggest rat I’ve ever caught.’ It took me an hour to get Cruella off the roof of the car. I bought a pair of those gloves from Still Bill to give to Cruella this Christmas. I think she’ll be surprised.”

The man stopped while I was ringing bells for the Salvation Army to tell me that he’d seen a big owl in his yard one night and a bald eagle there the next day. Big birds. I told him that he should stop feeding venison and go back to putting sunflower seeds in his feeders.

Raptors are amazing birds. I watched a hawk circling overhead one day. It was a handsome red-tailed hawk. I was mesmerized by its seemingly effortless looping. For a moment I wished I were that hawk. Then I realized that I’d be getting dizzy while searching for a rat to eat.

Kathy Spooner of Hartland asked how to remove skunk odor from a building. Place bowls of vinegar in building corners. If that doesn’t work, you could try cooking cabbage and rutabagas in the building.

“Why aren’t raccoon coats as popular as they once were?” They are still popular. All the raccoons I see in my yard are wearing them. Raccoon coats, a full-length fur coat made of raccoon hides, were a fad in the 1920s. Such coats, popularized by the crooner Rudy Vallee, were particularly popular with male college students. Raccoon coats enjoyed a revival in the 1950s, but the popularity of fur garments has declined.

Jim Lageson of Ellendale “We have a small pond near us. With all the rain this summer it never dried out. This fall I noticed a muskrat den, which I’ve never seen there before. There are now at least a dozen of the dens. Did a large family move into the pond or did just a couple of muskrats build multiple dens? I am surprised how many dens popped up.” The local muskrats must have had a successful reproductive year. Muskrats build lodges that are made of cattails and sedges, not sticks like beaver lodges. Therefore, muskrats are more commonly found in shallow marshes with abundant cattails instead of wooded areas that beavers prefer. Muskrats build in shallow water and access the nest chambers by underwater tunnels like beavers. A muskrat lodge is smaller than a beaver lodge with a 6 to 8 foot diameter. Muskrats also excavate burrows in shoreline banks like beavers living in rivers. A muskrat has a small home range compared to a beaver, often less than 200 feet in diameter. A beaver can have a home range of one-half mile. Muskrats build a lodge and feeding shelters (also called push-ups). The feeding shelters are built on the ice as a place to feed, rest and warm up. The muskrat pushes various types of debris up through a hole in the ice until it forms into a pile large enough to hold a muskrat. Covered with snow, the shelter provides insulation to keep the hole in the ice open. You can identify muskrats because they are more buoyant than beavers, so more of their body is visible when swimming.

Dean Muesing of Mankato wrote, “I saw what looked like a flicker yesterday on the feeder. I thought they would be gone by now or are they winter birds.” Most northern flickers leave the northern parts of their range to winter in the southern U.S. Flickers that breed farther south typically stay put for the winter. Some flickers stay here. The stubborn ones, I suppose.

“Christmas gift suggestions: To your enemy, forgiveness. To an opponent, tolerance. To a friend, your heart. To a customer, service. To all, charity. To every child, a good example. To yourself, respect.” — Oren Arnold

“Were I a philosopher, I should write a philosophy of toys, showing that nothing else in life need to be taken seriously, and that Christmas Day in the company of children is one of the few occasions on which men become entirely alive.” — Robert Lynd