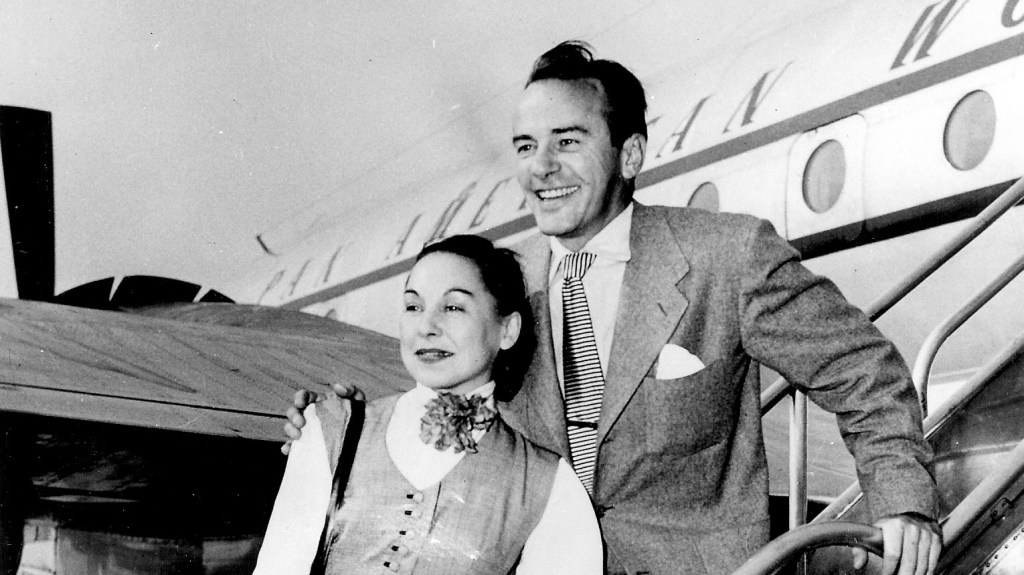 Richard Carlson was a film and television star who was born in Albert Lea and spent the first six years of his life in this city. This photo was taken in 1951. With him is his wife, former model Mona Mayfield. -Photo courtesy Freeborn County Historical Museum

For nearly 40 years, a former Albert Lea resident named Richard Carlson was one of the best known and most versatile stars of stage, screen and television.

Today this name may revive a few memories for folks from several prior generations, but there was a time when the Carlson name was both a familiar and important part of the American entertainment world.

Richarld Carlson was born in Albert Lea on April 29, 1912, the son of Henry and Mabel (Du Toit) Carlson. He had two older sisters and an older brother. His father’s parents had come from Denmark and settled in Riceland Township. His mother was of French ancestry and grew up in Chaska, Minn.

Henry Carlson graduated from Albert Lea High School in 1892, attended the University of Minnesota and was a lawyer with the local firm of Todd and Carlson. At the time of Richard’s birth he was president of the Albert Lea school board. The family lived at 525 Park Ave. from 1910 to about 1918 when they moved to Minneapolis.

In 1937, he went to New York City and was soon in the cast for the play “Now You’ve Done It,” and later in “The Ghost of Yankee Doodle” with Ethel Barrymore.

The following year David O. Selznick (producer of “Gone with the Wind”) brought Carlson to Hollywood to be a script writer on a film called “The Young at Heart” starring Janet Gaynor. The actress suggested that Carlson also do some acting. This 1938 film was his first.

In 1939 he married model Mona Mayfield. During World War II, Carlson joined the U.S. Navy and served for just over four years.

During his motion picture days, which ended in 1969, Carlson was in “The Duke of West Point,” “Winter Carnival,” “No, No, Nanette,” “King Solomon’s Mines,” “It Came from Outer Space,” “Creature From the Black Lagoon,” “Retreat, Hell!” “The Helen Morgan Story,” and other films which are still being revived on late night television programs and cable channels.

One biographical sketch said Carlson played “leads in B pictures and supporting roles in major productions. … He also wrote articles and stories for leading magazines (such as Reader’s Digest and McCall’s) and contributed scripts for various TV productions.”

During the era of Western-type television shows, he had the lead in a short-run series called “McKenzie’s Raders.” However, Carlson’s best known role and most lasting legacy was with a program called “I Led Three Lives” which ran from 1953 to 1956.

“I Led Three Lives” was based on the actual adventures of Herbert A. Philbrick of Boston, Mass., who wrote a best-selling book about his triple roles in life. Philbrick was an advertising executive and family man, a member of the American Communist Party and an undercover agent for the FBI. Carlson starred as Philbrick in the weekly series.