Shirley Rae (Stanley) Hovland died Monday, Dec. 12, 2016, at St. John’s Lutheran Community, where she resided for three and a half years. She was 88.

Funeral services for Shirley will be at 11 a.m. Tuesday at Bonnerup Funeral Service in Albert Lea. Chaplain Don Malinsky will officiate. Visitation will be one hour prior to the service. Interment will be in Graceland Cemetery. 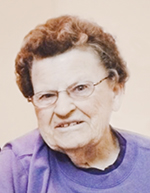 She spent her childhood in Iowa and moved back to the Hollandale area her senior year of high school. She graduated from Albert Lea High School in 1946. After graduation she rented a room in town from Mrs. Clark and worked at Woolworths.

On Sept. 3, 1950, Shirley was united in marriage to Melvin S. Hovland in Albert Lea. They made their home in Maple Island and had four children together.

Shirley was a homemaker and occasionally worked for local farmer friends in cabbage and potato harvests. She lived next door to her parents and cared for them as they aged. She was a member of the Happy Hour Club and served as president for many years. She attended Conservative Congregational Church of Hollandale.