Al Batt: Do all birds have tongues? Where does ‘cardinal’ come from? 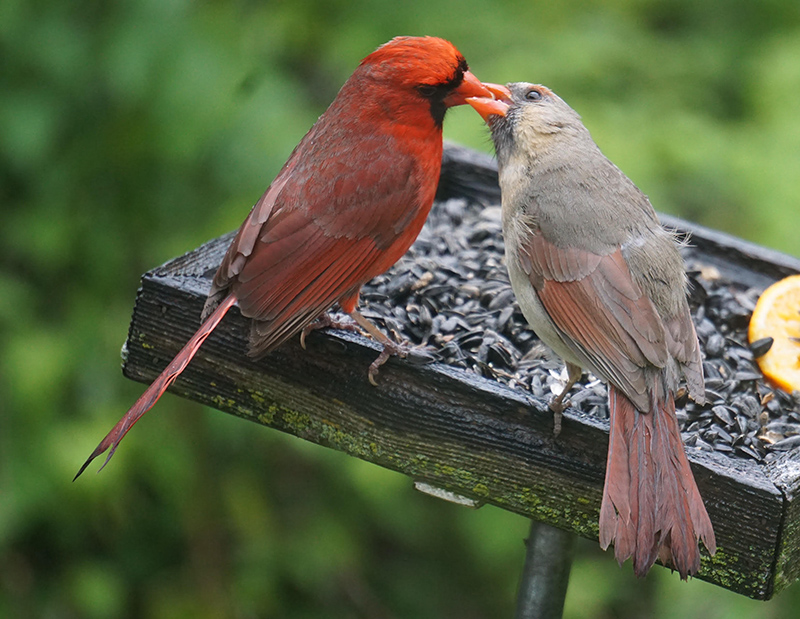 “Everything is nearly copacetic. I think we just missed another storm of the century. It veered a little east of the meteorologists’ predictions. It went to New Jersey instead of Minnesota. I had to build a new bookshelf in my den. The old one broke and all the books fell to the floor. I have only my shelf to blame. As a reward for a job well done, I fixed up some roasted garlic. I added a few of the strongest onions I could find. It was delectable. I couldn’t even see my breath until it had snuck up on me. I went to the cities for a family gathering. Seeing all the license plates of the cars on the interstate highway reminded me that we have 50 wonderful states, each full of people who don’t want to spend the winter there. It took me awhile to get on the road that morning. The walk to my garage was so icy that I slid backward three steps for every step I took forward. The only way I made it to my truck was by giving up and trying to walk back to the house.”

I walked briskly as if I were going past a skunk farm.

It was the January cold that caused me to hurry, not skunks. But then I caught the faint scent of a skunk.

It made me want to flip the calendar and see how close spring was.

A squirrel scurried up a tree and put the trunk between it and me. A squirrel knows where the back of a tree is. The name “squirrel” comes from two Greek words, skia, meaning, “shadow” and oura, meaning “tail.” A squirrel can position its tail over its body for protection from sun, rain or snow. It’s also a warm blanket when sleeping.

Coming home late one night in January, an eastern screech owl flew across the road in front of me. It’s a cool little bird to see at any time. Not far from that sighting, I spotted either a deer mouse or a white-footed mouse scampering across the same road. I’d wished that I had contact information for the tiny owl so that I could have given it a heads up as to where a meal might be found.

Foster Otten of Hayward asked if all birds have tongues. Birds don’t have fleshy tongues like ours, but they do have tongues. Different birds have different types of tongues. Birds that drink nectar have tongues shaped like tubes for efficient extraction of liquids. Some woodpeckers have long, barbed tongues to help them catch insects. The case could be made that a bird’s tongue serves more as a finder of foods than a taster of them.

Jack Madsen of Good Thunder wrote, “I was curious to see if it was true that parrots live more than 100 years? Apparently, as the song says, ‘It ain’t necessarily so.’” A nocturnal, flightless New Zealand parrot called the kakapo lives in the slow lane and lives on average for 58 years with a potential to reach nearly 90. Macaws can live 60 years in the wild. Charlie, who was reportedly owned by Winston Churchill, was said to have lived past 100. The bird was purported to have been taught to spew obscenities against Hitler and the Nazis. It’s a good story, but researchers have cast doubt on Charlie’s existence, saying that Churchill had no such parrot. Churchill’s daughter, Lady Soames, denied that her father ever owned a macaw. According to Soames, Churchill owned an African grey parrot named Polly, but sold the bird before becoming Prime Minister. Parrots in captivity have been known to live over 80 years. Cookie the Cockatoo, the world’s oldest parrot, died at the Brookfield Zoo at age 83.

“Where did the word ‘cardinal’ come from?” The redbird’s name derived from the red robes of the Cardinals of the Roman Catholic Church. It’s from the Latin cardinalis meaning “principal, chief, essential,” and from cardo meaning, “that on which something turns or depends; pole of the sky,” originally “door hinge,” which is of unknown origin. The Cherokee believe that the cardinal is the daughter of the sun and that if you see a cardinal flying upward toward the sun, you’ll have good luck.

“How did they get the birds to attack the actors in the movie, ‘The Birds’?” Alfred Hitchcock’s 1963 film “The Birds” employed live birds, puppets and animation. To attract the trained birds, actors often had ground meat or fish smeared on their hands. The star, Tippi Hedren, has spoken often about the scene where she’s attacked in the attic. That scene took a week to shoot, but ran about a minute on the screen. Hitchcock insisted on having trained gulls attack her. They were attached to her costume by elastic bands.

“Why are goose bumps called ‘goose bumps’?” Because they just are. That’s why. Boy, every adult has to love that answer. They are also called goose pimples or goose flesh, appearing on our skin when we are cold or frightened. Bumps appear at the base of body hair making it stand up straight. The reflex of producing goose bumps is known as horripilation. The term “goose bumps” likely came from a similar appearance to a plucked goose. Other parts of the world call it hen or chicken flesh and duck or bird skin.

“You must not blame me if I do talk to the clouds.” — Henry David Thoreau

“Write it on your heart that every day is the best day in the year.” — Ralph Waldo Emerson

Al Batt: What do American kestrels eat? Do they…