Al Batt: What do American kestrels eat? Do they hunt bird feeder visitors? 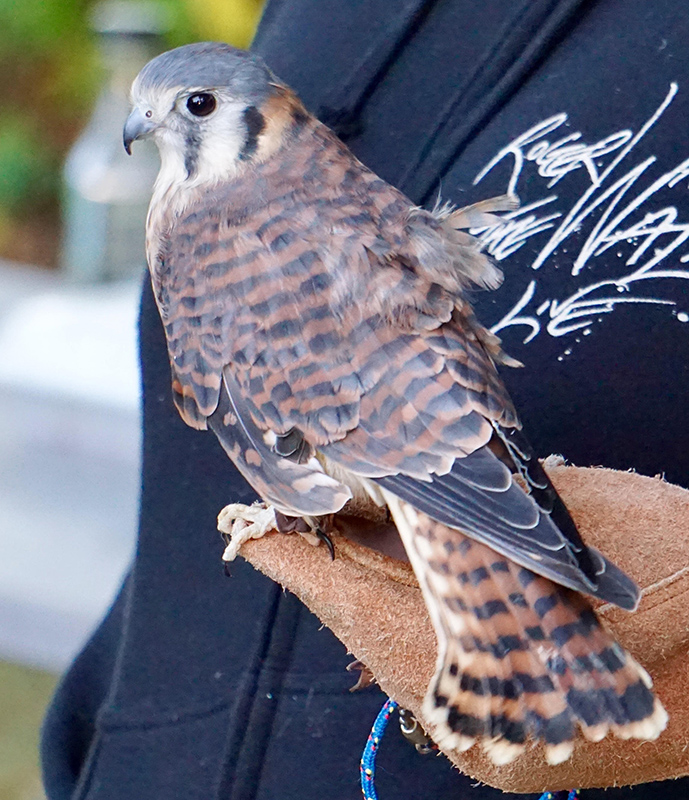 “Everything is nearly copacetic. I’m still able to scratch what itches. I just bought a new pair of britches. While I was trying them on, it dawned on me. I thought ‘Well, I’ll be a polka dot spider. If my waist size and my inseam were the same, I’d be 8-feet tall.’ I’m a busy guy. I don’t even have time to blink during the day. That means I’m usually exhausted by the time I go to bed. I’m a sound sleeper, but I rolled over in bed last night. It must be the gypsy in me. I burned some biscuits yesterday. Tough tadpoles, that burned me up, too.  I make a mean biscuit because I love biscuits and gravy. I was baking the biscuits in the oven when they started smoking. I watched them smoke for 15 minutes.”

“You watched them smoke for 15 minutes? Why didn’t you shut the oven off?” I say.

“You say such idiotic things that I’m lucky they don’t cause me to snort an entire cup of hot coffee. Boy, you don’t know anything about baking, do you? You have to wait for the oven timer to go off.”

A fellow from Auke Bay, Alaska, told me that he’d left a pack of cigarettes on his boat and a raven stole them, one heater at a time. Even though it was a raven and not a crow, he named the bird Edgar Allan Crow.

It reminded me of the Australian birds that I wrote about a year ago. Black kites and brown falcons swoop down on burning twigs and embers and carry them to the bush where they are thought to deliberately start fires. They then capture the large insects, frogs and animals rushing to escape the fire.

I enjoy Christmas bird counts. My job is to make sure that each bird counted gets a certificate of participation.

“I just put up a bird feeder. How can I get birds to come to it?” Position the feeder in an appealing, safe location, preferably near shelter so the birds feel secure. Fill a new feeder with black oil sunflower seeds or nyjer seeds. Spread seed on the top of the feeder or on a nearby platform, stump or ground near to draw attention to it. Other birds act as a billboard to attract new customers. They are like the 97 vehicles we see outside a small cafe. It makes us want to stop there for lunch. I hope your feeder becomes a busy eatery.

“I like feeders that stick to the windows of my house. How can I get those suction cups to stick?” I love those feeders! The cups do wear out after long usage and replacements can often be found. When good cups no longer adhere to the glass, I wash the window and then soak the suction cups in hot water for a minute or two. This soaking restores flexibility to the plastic. Dry the suction cups and apply a bit of vegetable oil to them. Wipe gently. Suction cups cleave best to warm windows. In cold weather, wait until the sun hits the window or use a hair dryer to warm the glass. Push the cups against the window to force out any air bubbles behind them. Let the cups set for a few hours before filling the feeder.

“I saw an American kestrel in January. What do they eat? Do they hunt my feeder birds?” American kestrels eat mostly insects and other invertebrates. Common foods include grasshoppers, cicadas, beetles, dragonflies, spiders, butterflies, moths and earthworms. They also feed upon voles, mice, shrews, bats, frogs, lizards, snakes, crayfish and small songbirds. Most of the hawks hunting birds at feeders are accipiters — either the Cooper’s hawk or the sharp-shinned hawk. They have long tails that act like rudders and short wings that allow flying in confined areas. According to Hawks Aloft in Albuquerque, over 95 percent of the diet of a sharp-shinned hawk is small birds. Only 50 percent of the diet of a Cooper’s hawk is small to medium-sized birds, as they also prey upon mammals.

“When asked if I am pessimistic or optimistic about the future, my answer is always the same: If you look at the science about what is happening on earth and aren’t pessimistic, you don’t understand data. But if you meet the people who are working to restore this earth and the lives of the poor, and you aren’t optimistic, you haven’t got a pulse. What I see everywhere in the world are ordinary people willing to confront despair, power, and incalculable odds in order to restore some semblance of grace, justice, and beauty to this world.” — Paul Hawken