He was born Oct. 17, 1939 in Sheldon, Iowa, the son of Cornelius and Jennie (Buss) Koopal.  Bill grew up in Lyle and graduated from Lyle High School. He worked for Alton Wilder Farms and then for Freeborn County Co-op. 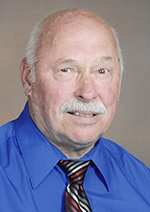 Bill married Eileen Gilbertson at St. Olaf Lutheran Church in Austin on Aug. 29, 1959. The couple raised two daughters. He went to work for Hormel Foods Corporation in 1972 and worked there until 1986. Bill owned a house-moving company, which he operated until he retired in 2000.

He was a member of St. Olaf Lutheran Church, where he was an active volunteer. Bill loved gardening, canning, fishing, cooking and baking, woodworking and antiquing. He enjoyed watching his grandchildren play their sports, and treasured any time he could spend with his family and friends. Bill belonged to the Eagles Club, served as a 4-H leader and was on the board of Woodbury Cemetery in Lyle. He also enjoyed his card club.

Bill will be dearly missed by all who knew and loved him.

He was preceded in death by his parents; and his wife, Eileen, in 2013.

Funeral services will be at 11 a.m. Tuesday at St. Olaf Lutheran Church in Austin with Todd Portinga, AIM, officiating. Visitation will take place from 4 to 8 p.m. Monday at Worlein Funeral Home in Austin and for one hour prior to the service at the church on Tuesday. Interment will be in Woodbury Cemetery in Lyle.

In lieu of flowers, memorials are preferred to the St. Olaf Lutheran Church building fund or Woodbury Cemetery. Worlein Funeral Home of Austin is assisting the family with arrangements. Condolences may be expressed to the family online at www.worlein.com.