Al Batt: How big of a threat is an outdoor cat to the neighborhood birds? 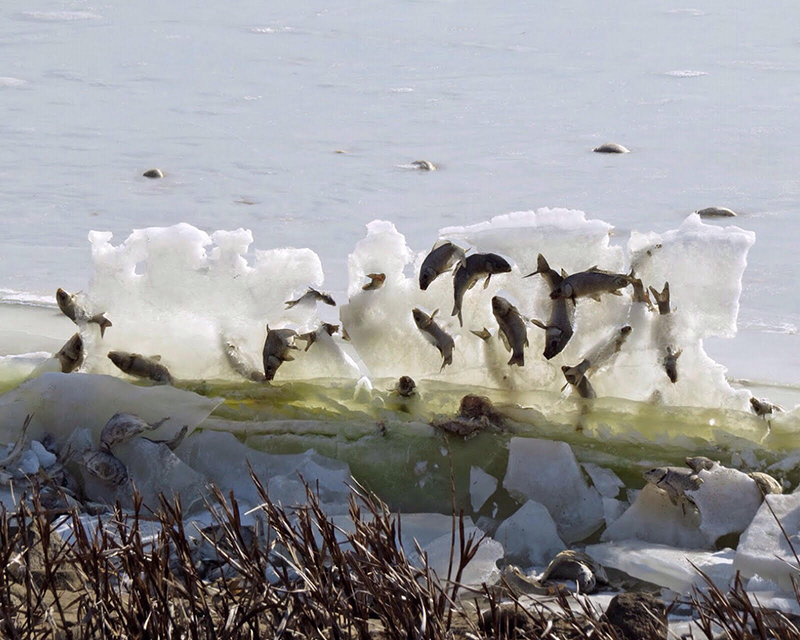 This photo of a wall of fish was taken by Kelly Preheim of Armour, South Dakota. - Provided

“Everything is nearly copacetic. I love days that identify themselves by their smell. Every Sunday, Ma fries up some bacon and bologna for breakfast. Those two odors combine with the smell of coffee to form a heavenly layer of Sunday scents. I’m a little sore from shoveling snow. Winter is always able to provide painful employment for energetic young men like me. I did take the time to polish my “Ridding the world of fossil fuel” bumper sticker on my pickup truck. I attended a meeting at the fire hall. Volunteer firefighters are among the best things a human can be. Being a volunteer fireman was a great part of my life. I think it started when we were in the third grade and Mrs. Siblerud took our class to the fire hall. Do you remember that?”

“You’re the reason I became a fireman. I wanted to save you. The Chief could pick a donkey out of a herd of racehorses, so he asked you what you’d do if your clothes were on fire? Do you recall your answer? I’ll tell you what you said. You said, ‘I wouldn’t put them on.’”

Diane Arbus said, “My favorite thing is to go where I’ve never been.”

I watched a balled flock of starlings fly. Not everyone likes the starling. Many think it ugly. I think everything is beautiful. I’m called to witness, not judge. Things that fly are brilliant. Nature doesn’t trust me with wings. The flock whirled and wheeled in the air, turning fast and coming around, blackening a small bit of the world. It formed a fist before thinning and changing direction. It’s called a murmuration. It’s a sight that the word “amazing” was created to describe.

It was good to see, great to appreciate.

“Why do snowy owls descend from the Arctic every winter?” It’s not because of hunger. Research has shown that it’s due to a bumper crop of young snowy owls. Some do die of starvation while here, but they don’t come here because they are starving.

“How big a threat is an outdoor cat to birds?” Research published in the journal “The Annual Review of Ecology, Evolution and Systematics” found that cats kill approximately three times more wild birds than all other known human-related direct causes (windows, automobiles, power lines, towers, agricultural chemicals and wind turbines) of bird deaths combined. A bird death due to habitat loss is considered indirect mortality.

“What is a good way to identify birds?” Size can be difficult to determine in the field, especially in poor light or at a distance. Size comparisons are easiest when an unidentified bird is seen near a familiar species. Otherwise, use the sizes of well-known birds, such as the house sparrow, American robin and American Crow as references to determine size. Pay attention to body and tail shapes, the proportions of head, legs and wings, and the length and shape of the bill. Notice field marks–patterns and colors. Consider the habitat where the bird was seen.  Take notes. Take a photo. Draw the bird. Record the bird’s song if possible. Do these things promptly as the memory of a human is a trickster. Then search for the bird in your favorite field guide.

I had the nicest surprise recently. And it happened twice. Good and better! I read the “New York Times” and listened to CBC Radio’s “As It Happens.” It’s a rare day when I don’t do those two things, but what made them special was that a friend was featured in both. It made my day.

Kelly Preheim, a teacher from Armour, South Dakota, took a photo of fish that appeared to have frozen both in midair and in ice. The 4-foot wall of frozen fish was photographed at Lake Andes National Wildlife Refuge in South Dakota. Kelly called them “fishcicles.” When the photo was taken in 2015, the area had been in a drought, which created low water levels. Thick ice formed on the lake and when combined with snow cover, blocked sunlight, which caused plants to die. Oxygen levels were depleted due to dead and decomposing plants. The fish suffocated under the ice.

Why the wall of fish? Here are two possible explanations. The ice, with the fish included, may have cracked during expansion and forced parts upward. Strong winds might have pushed ice and its contents upward into a fish wall.

Kelly said that bald eagles and gulls feasted upon the fishcicles. The fish, which were overabundant and nonnative (carp), had thrown the system out of whack. The feeding of common carp disrupted shallowly rooted plants and muddied the water. This reduction in water quality caused the decline of aquatic plants needed by waterfowl and fish. In the absence of the carp, the water cleared and the remaining plants thrived in the increased sunlight. More plants mean more wildlife.

“Beauty is before me. And beauty is behind me. Above and below me hovers the beautiful.” — Navajo saying

Al Batt: Do all birds have tongues? Where does…