Al Batt: What animals eat poison ivy berries? How are ravens so smart? 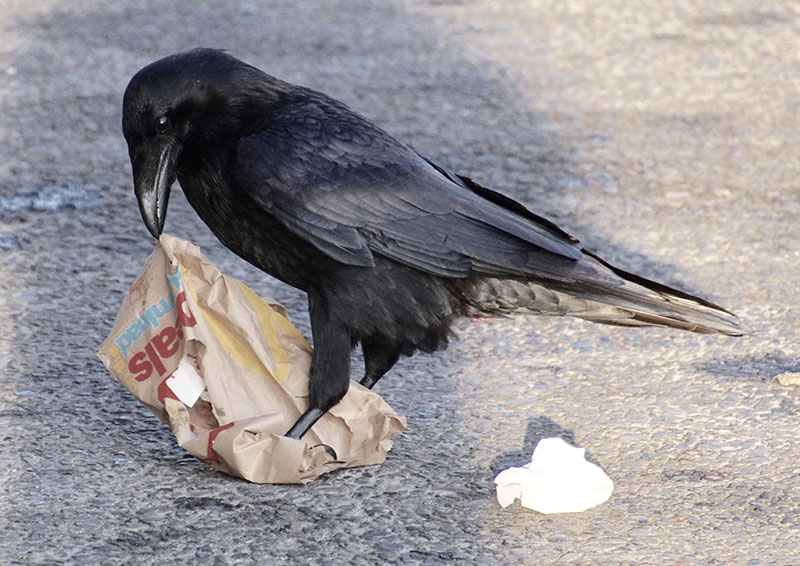 Ravens are known to be very resourceful creatures when it comes to scavenging for food. - Al Batt/Albert Lea Tribune

“Everything is nearly copacetic. I’m more monkey than a barrel of fun, but I’m as healthy as an ox, weigh the same as an ox, I’m as strong as an ox and twice as smart as an ox. I try not to have days that make me feel as if I have a “Kick me” tattoo that everyone can see by avoiding people who brighten my day like a total eclipse of the sun. All in all, I have complaints, but who cares if a glass is half-empty or half-full as long as what’s in it quenches my thirst? I’m just thankful to live in one of the healthiest places on earth. I’m as happy as a duck in a puddle to be here. I don’t know if it’s the air, the water, the hotdishes or what, but this is a wholesome place to be. When I arrived here, I had hardly any hair on my head, I didn’t have the strength to walk across a room, someone had to feed me and I had to be lifted out of bed. Now look at me.”

“That was the day you were born here,” I say.

Ears some good news for me

I spend time in Juneau, Alaska, every year.

I’ve done so for years.

I love Juneau. It’s cloudy and wet, but captivating. There is so much to see. Mendenhall Glacier, Alaska State Museum, Shrine of St. Therese, Mount Roberts and a long list of other breathtaking sights. One of my favorite aphorisms is, “Life is not measured by the number of breaths we take, but by the moments that take our breath away.” The author is disputed, so I want you to take the credit for saying it.

I stay in the same hotel every year. Why? Because it’s reasonably priced. I like a hotel room that has a bed and a shower. I also enjoy having walls, floor and ceiling. A door is nice, too. Anything else is fluff.

It isn’t at the corner of broken dreams and failed promises. The hotel is located in a spot where I can get to places I need to get to. It’s not far from the airport. The City and Borough has a population of approximately 33,000, but it covers a large area. Being the capital of Alaska makes it a busy place.

The hotel offers a continental breakfast, allowing me sit quietly in a corner, eating yogurt and cereal, drinking tea and trying not to listen to a blaring TV.

The hotel provides unintentional entertainment. One afternoon, two men wrestled in an argument over who would pay the bill. I sprung into action and took the opportunity to checkout before them.

Another night, two young men who had been over-served were duking it out in the hotel’s parking lot. They were too inebriated to do much damage. They were being encouraged by their girlfriends who were also sloshed. I tiptoed by to get to a bakery.

When I came back to the hotel, the police had arrived. They warned the combatants to break it up or they would be going to jail. The miscreants were like the comedian Ron White, who said, “I had the right to remain silent, but I didn’t have the ability.”

They lipped off and were handcuffed and put into the squad car.

One of the girlfriends protested, “What are you arresting him for? He didn’t do nothing!”

A police officer recommended that she stifle herself. She was unable to do so and was handcuffed and taken away. The other young woman remained silent, having reached the point where she was unable to form words.

A band was kicked out of the hotel one year, only to have an ex-wife of one member sneak them in the back door.

Entertainment like this would cost an arm, a leg and a pint of blood in Las Vegas.

Part of the reason I stay where I do is because I’m a creature of habit. It’s not a superpower, but it’s me.

How smart? Had there been a raven in my high school class, we’d have had a class valedictorian. The school had refused to give that award to our leading student who had nearly a C- average.

I watched ravens walking through the drive-through lane of a nearby fast food restaurant. Two of them, checking the ground for fallen french fries and homeless hamburgers, bumped into one another. It was a feather bender.

Humans stop at that eatery and often get bags of grub to go. Some of them walk the short distance to a bakery to get a doughnut or sweet roll to put the finishing touches on a meal. The walk is just long enough that the meals are eaten and the bags deposited in a proper waste receptacle.

The ravens fly to the trash container and use their big bills to pull the bags out. They shake, rip, tear, slice, dice and maybe even make julienne fries of the bags. They find tasty morsels in forgotten fries and broken buns. They are chronic litterers, but I forgive them.

To the ravens, each bag of fast food is a happy meal.

You see, I go to Juneau to revel with the ravens.

“Is there an ugly bird?” No living creature is ugly.

“I take care to appear happy and especially to be so.” — St. Therese of Lisieux

“Traveling makes one modest: one sees what a tiny place one occupies in the world.” — Gustave Flaubert