Al Batt: Why do starlings look so different in the spring? Are they molting? 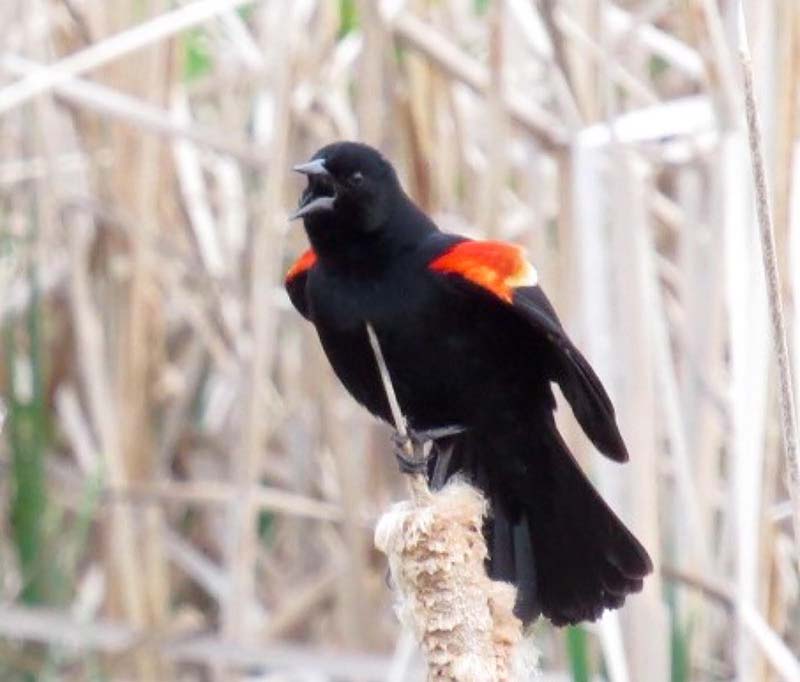 A red-winged blackbird finds something to squawk about. - Al Batt/Albert Lea Tribune

“Everything is nearly copacetic. I took my truck into Denton Fender’s to have some door dings taken out. I wasn’t pleased with his work. I pointed at the door. The paint didn’t match, some dings were still visible and he’d scratched the rust in one spot. Denton fixed it immediately.”

“By telling me that the repairs were to the other side. A full-sized truck should never be form-fitting, but my waist is still keeping up with my age. The men in my family have ample midsections. All my father’s brothers have chronic eating disorders. When they go to the cafe, they eat disorder and disorder and disorder and datorder. My uncle Ralph liked to eat while walking. He said that walking took all the calories out of whatever he was eating. He didn’t think there was any problem that a doughnut couldn’t fix. When the local cafe closed, Ralph had to buy a toaster. Today is a sad day. It’s the anniversary of the day Ralph died while camping. He was killed by bears.”

“He choked to death while eating gummy bears,” I say.

“What’s your point? Bears are bears.”

Red-winged blackbirds sang, causing March to sound like a marsh.

A woodpecker hammered on a resonant, dead limb. It was a declaration of territory. Woodpeckers have a knack for hammering.

I saw a red-tailed hawk feeding on an opossum. Blue jays, crows and a male cardinal were outraged by the presence of the raptor. The chickadees went about their normal business, dismissing the hawk as no threat to them.

The official start to spring may not have been until March 20, but meteorologists break the seasons into groups of three months, based on annual temperature cycles around the globe. Meteorological spring runs from March 1 to May 31 every year, whereas the vernal equinox can occur on either March 20 or 21.

Edna St. Vincent Millay wrote this in an “Afternoon On A Hill.” — “I will be the gladdest thing under the sun! I will touch a hundred flowers and not pick one.”

Come on flowers! We’re ready for you.

“Is there really such a thing as a snow flea?” There is. On a sunny winter day, I took a look at snow that had melted a bit around the base of a tree in our yard. I saw what appeared to be spilled pepper on the top of the snow. The pepper was moving. Snow fleas remain active in the winter and feed upon fungal spores and algae. The snow flea isn’t a flea, it’s a springtail. Springtails get their name because they can use their tails to jump.

“I saw a giant mosquito in my house in February. Is that a rare sighting?” It probably wasn’t a mosquito, but a related insect called the crane fly. Crane flies are common insects in Minnesota. They have slender brown or gray bodies and long legs. Crane flies range in size from three-eighths to 1 1/2 inches long. Despite resembling mosquitoes, crane flies don’t bite. They usually live for only a few days. The source of the crane fly found indoors could likely be traced to houseplants that were outside at some point during the summer. Crane flies had laid eggs in the soil. The larvae finished their development indoors and emerged as adults. Crane flies are harmless.

“Why do starlings look so different in the spring? Do they molt in the winter?” When European starlings molt in the fall, the new feathers have white tips, giving the appearance of stars. Over the winter, friction, sunlight and weather dulls the speckled look as the tips wear off and the bird becomes a more uniform dark brown or black. Starlings also have seasonal changes in bill colors as they are yellow in the spring and black in the fall.

The Martin County Conservation Club and Fairmont Eagles Club are sponsoring a habitat day for Saturday, April 8 to offer youth an opportunity to build a wren/chickadee house or robin-nesting shelf. It will start at 10 a.m. and end at noon at the Fairmont Eagles Aerie at 1228 Lake Ave in Fairmont. For more information on this free event, please call Steve Maurice at 507-238-4073.

The Hormel Nature Center in Austin has a new building and new exhibits that will be opening to the public at 1:00 p.m. on Earth Day, April 22.

Please join me at the Bluebird Recovery Expo that will take place from 8 a.m. to 4 p.m. April 22 at Northfield Middle School. There will be an abundance of vendors, speakers, helpful advice and a plethora of good people. Email jeanieandcarl@hotmail.com for more information or to register.

“One must never be either content with, or impatient with, oneself.” — C. S. Lewis

“One of the consolations of old age is the intense pleasure I now get from nature. It seems that in youth I was too busy confronting life and experience to stand still and gaze.” — P. D. James