Funeral services for Irene Anna Rauenhorst Butler of Albert Lea will be at 11 a.m. Thursday at St. Theodore Catholic Church of Albert Lea. The Rev. Russell Scepaniak will officiate. Visitation will be one hour prior to the service at the church. Interment will be in St. Theodore’s Cemetery in Albert Lea.

Irene was born June 17, 1913, in Wells, the daughter of Lawrence and Amy (Gillson) Rauenhorst. She grew up near Wells and lived for a short time by Austin, before she moved with her family to Albert Lea. 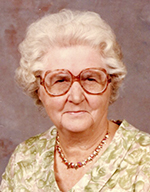 On July 2, 1940, Irene was united in marriage to James H. Butler at St. Theodore Catholic Church in Albert Lea. For a short time they lived in Wilks-Barre, Pennsylvania, where James was sent by his employer to help start a new Weyerhaeuser plant. They then returned to rural Albert Lea and remained there the rest of their lives.

Irene was a member of St. Theodore Catholic Church and had been active in the CCW and the Altar Guild for many years. She enjoyed baking, gardening, fishing and playing cards with her family. She lovingly cared for her family and gave them comfort and support her whole life.

Irene is survived by her children Darlene Henderson of Waseca and James L. Butler of Hollandale; her granddaughter, Elizabeth Nowak, and her husband, Justin, of Mayer; her great-grandson, Calvin Nowak; her sister-in-law, Darlene Rauenhorst, of Glenville; and two nieces, one nephew, great-nieces and nephews, cousins and good friends.