Pat Huddleson of Albert Lea passed away Monday, March 27, 2017, after a long illness.

Born Patricia Ann Ellis on Oct. 19, 1936, she moved with her family to northern California in 1948. After finishing high school and attending Multnomah Bible College, she met Merlin Huddleson at First Covenant Church in Eureka, California. Pat and Merlin were married March 12, 1960, and settled in Eureka, where they raise two children, Mark Ellis and Jane Alice. Pat was involved in the Parent and Teacher Association and together they were very involved in the efforts of Eureka Rescue Mission, where Pat was president of the ladies auxiliary for several years, First Covenant Church and Triumphant Life Camp. 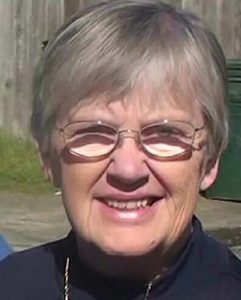 In 1991, after retirement from running her own floral and cake business, Pat and Merlin moved to Albert Lea to be near their daughter, Jane.

Pat was preceded in death by her parents Ralph Ellis and Merle Noble; and her brother, Don Ellis, of Eureka.

She is survived by her sisters Mary McGathy of Lubbock, Texas, and Paula Elston of Valley Springs, California; her husband, Merlin Clifford Huddleson, of Albert Lea; her son, Mark Ellis Huddleson, of Eureka; daughter- and son-in-law Jane Alice Miller and Richard Miller of Albert Lea; and several nieces and nephews.

In lieu of flowers or cards, donors can give to her memorial fund at Eureka Rescue Mission Remodeling Fund, P.O. Box 76, Eureka, CA 95502; and online payments can be made at eurekarescuemission.org.