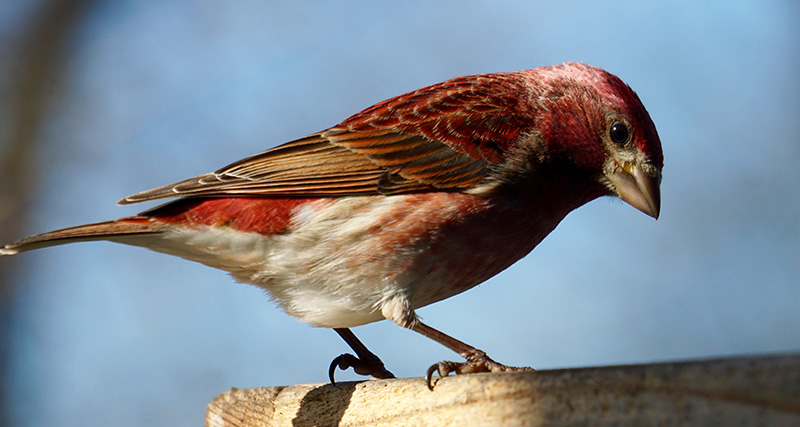 Purple finches can appear to be red in color. Al Batt/Albert Lea Tribune

“Everything is nearly copacetic. I eat in only three places–here, there and everywhere. Remember when we were kids? Ma would fix vegetable-beef soup. We’d have the vegetable for lunch and the beef for dinner. I was tried and found guilty at the food court in the mall. Because of that, I’m eating more celery, nature’s dental floss. And I’m trying to learn that there is a “we” in jelly doughnuts. It’s difficult to share a jelly doughnut with anyone. I like to go walking on the bike trail while eating a jelly doughnut. I don’t run, but I run better than the federal government does. Say, I’m sorry that I didn’t get you something for your birthday. I completely forgot about it. I’m not doing any shopping until I get a trailer hitch for my moped. You should have your birthday on the same day each year.

“I’ll try that. It’s OK that you didn’t reward me for getting older,” I say.

“Come to think of it, I got you nothing last year, too. I’m sorry for getting you nothing.”

I didn’t need an early wake-up call, but I got one anyway. A flicker declared his territory by drumming on an unused TV antenna tower attached to the house. The flicker’s energetic percussive instrument, which he hammered at about 25 times per second, sent reverberations throughout the house. Northern flickers eat mainly insects, especially ants and beetles that they find on the ground.

I’m glad I got the alarm. It allowed me to hear a brown thrasher. It’s one of my favorite birds. Brown thrashers are mimics with extremely varied repertoires. Brown thrashers believe that some things bear repeating. Men share that belief. The male sings a loud, long series of doubled phrases with no definite beginning or end, typically singing phrases twice. Some people describe his song as this mnemonic, “Plant a seed, plant a seed, bury it, bury it, cover it up, cover it up, let it grow, let it grow, pull it up, pull it up, eat it, eat it.”

I watched a fox squirrel tightrope-walk on a utility wire. It’s an amazing feat that is amazing to see. It was a one-squirrel circus.

Ruby-crowned kinglets and yellow-rumped warblers gleaned the trees for food. Purple finches delighted me with their beauty. Like the juncos, they’d be booking flights out of here soon.

Chickadees entertained with their antics. The average lifespan of a chickadee in the wild is 2.5 years. Keeping their tiny half-ounce body working requires a lot of fuel. From sunrise to sunset, the chickadee spends most of its time feeding. During the summer, it eats 70 percent insects and 30 percent seeds.

Song sparrows, house finches and white-throated sparrows sang. The birds were full of song. I was filled with listen.

“I see wild turkeys in the city. Are they everywhere in Minnesota?” The wild turkey release program began in Minnesota with the release of 29 birds from Missouri into Houston County the early 1970s. The state’s turkey population has grown dramatically since then. Populations are highest in the southeast, but good numbers exist in the central part of the state as well as parts of the northeast. Wild turkeys exist nearly everywhere in Minnesota and the expansion of the turkey range continues throughout the state as wild turkeys rewrite the book on wild turkey habitat requirements and find homes in places that were formerly considered unsuitable for them. Habitat required for wild turkey survival is generally mature hardwood forests interspersed with cropland and non-agricultural openings, brushy grasslands and river bottoms. Acorns are a favored food, but they eat other nuts, crops, berries, seeds and insects.

“Do some butterflies hibernate as adults in Minnesota?” Some do spend the winter here in adult form, including some red admirals, question marks, commas, mourning cloaks and tortoiseshells that hibernate in hollow logs and trees, under loose bark or eaves, and in buildings. I’ve just been seeing some red admirals, some of which do migrate.

“Something sounds like an electric sewing machine in my yard. I think it’s a bird. What could it be?” A chipping sparrow would be a likely suspect.

“When do cardinals pair up?” Most cardinals form their pair bonds February to April. Males and females that have been paired in previous seasons are often the first to pair up as the new breeding season begins, sometimes as early as January.

Alderman Howard Brookins Jr., who represents Chicago’s 21st Ward, was biking on a trail when a squirrel jumped in front of him, got caught in the spokes of his bicycle and sent Brookins flying over the handlebars. Brookins was hospitalized for four days after suffering a fractured skull, a broken nose and the loss of several teeth. The squirrel perished. The incident seemed more than coincidental – coming just a month after Brookins had raged against the city’s aggressive squirrels during a city council meeting, lambasting them for eating their way through Chicago’s trash cans.

“I can think of no other reason for this squirrel’s actions than that it was like a suicide bomber, getting revenge,” Brookins told the Chicago Tribune.

“Discovery consists of seeing what everybody has seen and thinking what nobody has thought.” — Albert Szent-Gyorgi

“Everybody needs his memories. They keep the wolf of insignificance from the door.” — Saul Bellow