Al Batt: How can you tell a bald eagle from a golden eagle while in flight? 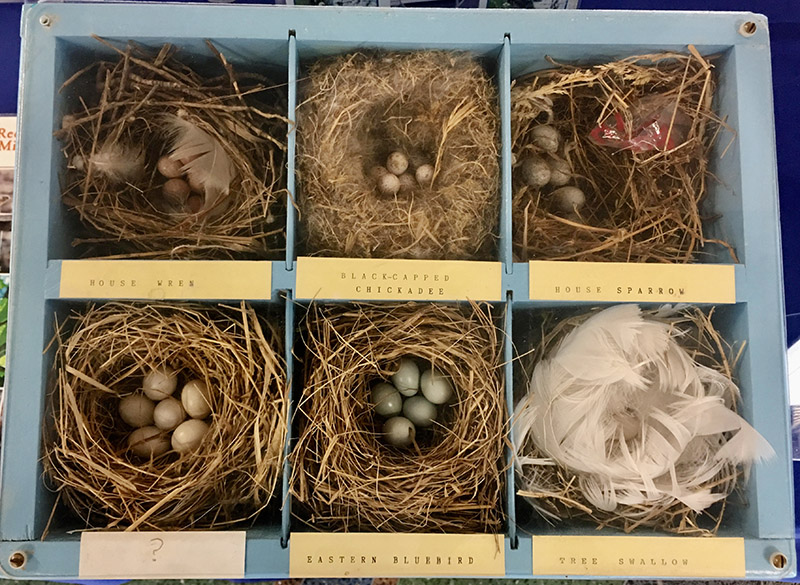 A display of nests was featured at the Bluebird Recovery Program Expo. - Al Batt/Albert Lea Tribune

“Everything is nearly copacetic. But it’s a cold and clammy April day.”

“I have to ask you. At Christmas, you showed up wearing shorts and flip-flops just like you are wearing today. What’s the deal?” I say.

I listened to Leonard Cohen’s “Hallelujah.”

That song is an effective palate cleanser for me.

Outdoors, I listened to the wind.

I saw a halcyon. It was a belted kingfisher. The halcyon was a mythical bird, identified with the kingfisher, which was fabled to nest at sea about the time of the winter solstice and calmed the waves during its incubation. It has come to identify times marked by peace and prosperity, as in “halcyon days.”

I saw lightning and I heard thunder. I counted the number of seconds that passed between the flash of lightning and the crack of thunder following it, and divided that number by five. The resulting number told me how many miles away I was from the lightning. Five seconds, for example, indicates that the lightning struck 1 mile away. This technique is called the flash-to-bang method. The National Weather Service recommends taking cover if the time between the lightning flash and the rumble of thunder is 30 seconds or less, which indicates the lightning is about 6 miles away. This method is based on the fact that light travels faster than sound through the atmosphere: Light travels at 186,291 miles per second, whereas the speed of sound moves only about 1,088 feet per second, depending on air temperature.

Despite the brewing thunderstorm, it was a halcyon day. Hallelujah!

“How can I tell if it is a golden eagle or a bald eagle in flight?”

They are about the same size. Golden eagles typically soar or glide with wings lifted into a slight V and their wingtip feathers spread like fingers. They capture prey on or near the ground that they locate by soaring, flying low over the ground or hunting from a perch. Bald eagles are more common, widespread and gregarious than golden eagles. Bald eagles have larger heads and soar with their wings flat across, like a board. Adult golden eagles lack both the white mottling of immature bald eagles and the white heads and tails of adult bald eagles. Young golden eagles often have white patches under the wing and at the base of the tail, but it’s always more clearly defined than the white mottling on the body and wings of immature bald eagles.

“How can I tell if my yard is being tormented by voles, moles or pocket gophers?” Moles are typically gray, black or deep brown in coloration. Their smooth coats sometimes feature white markings. They generally grow to lengths of 6 to 8 inches. Moles have tiny eyes and ears, wide front feet and angular snouts. They make their homes underground, searching for food by digging around in the soil. Their favorite foods include earthworms, snails, beetles, ants and centipedes. They leave evidence of their digging in the form of dirt mounds shaped like volcanoes or surface tunnels.

Voles don’t look like moles. Voles, often called field mice or meadow mice, usually have grayish-brown coats. They are usually between 5 and 7.5 inches in length, including their tails. They have notably short limbs. Like moles, voles also have extremely small eyes and ears that are hard to discern amidst their coats. Unlike moles, voles don’t create soil masses on the surfaces of landscapes. Voles eat seeds, tree bark, plants and insects. They can be bothersome to young trees, often girdling the bark.

Pocket gophers are typically between 6 and 12 inches long, including their tails. Their short coats are usually a lackluster brown. The coat has no pockets. The pockets are the large cheeks that are fur-lined pouches. Pocket gophers have squat bodies, beady eyes and yellow teeth. If a pocket gopher is present in your yard, you might notice fan-shaped soil heaps that have diameters between 18 inches and 2 feet. Mounds and runways can cause damage to livestock and machinery, and may lead to the reduction of crop yields.

“Raise your words, not voice. It is rain that grows flowers, not thunder.” — Jalaluddin Rumi