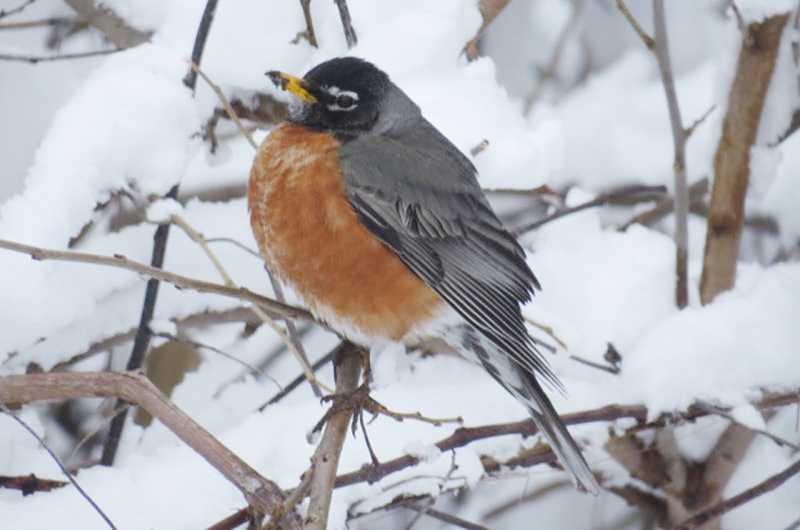 A robin perches on a branch to avoid the snow-covered ground. Al Batt/Albert Lea Tribune

“Everything is nearly copacetic. There are rocks in my mountains. I did learn something important this winter. If you’re going to try cross-country skiing, start with a small country. I just got it back from Mel’s Auto Repair, where everything is Mel adjusted, but there is still something wrong with my truck. There has to be. I’m getting about 14 feet to the gallon. There has been an alarming increase in the number of things I know nothing about. I was once an honor student. I don’t know what happened.”

“I know. You lied about being an honor student,” I say.

“The devil is in the details and the memories of those who have known you all your life. Still Bill and I have been appointed to the Hartland Beautification Committee. Our jobs are to stay out of town. Oh, speaking of Still Bill, his dog bit him on the little finger while they were fighting over a pork chop. The dog left no comment card, but Still Bill is convinced that he has rabies.”

“No, he’s too busy making a list of the people he is going to bite.”

The Raptor Center called and asked me to pick up an injured bald eagle in Northwood.

“What do small birds do in strong winds?” Songbirds perch securely in hedges or on the protected sides of trees. Many birds are able to detect subtle changes in air pressure. If they think the need to hunker down is coming, birds eat high-fat, high-energy foods to get through the storm.

“Do wind turbines kill bats?” New research published in Biological Conservation said that spinning wind turbine blades might be threatening the survival of one of North America’s most widespread migratory bat, the hoary bat. Mike Daulton, executive director of Bat Conservation International, said, “This species is headed for the emergency room if we don’t act now.” The hoary bat is the species most frequently killed by wind turbines in the U.S. and Canada. Widespread across the continent, an estimated 128,000 hoary bats are killed each year. The study, done by international experts, academics and biologists from several federal agencies, looked at hoary bat mortality at wind energy facilities. It revealed that populations of the species might plunge by 90 percent over the next 50 years if no action is taken. The findings are a wakeup call. The future isn’t all doom and gloom. Daulton added, “Solutions are within our grasp. We have great hope that this is a problem that the conservation community, key government agencies and the wind industry can work together to solve.”

“When are deer born here?” The mating season lasts from October to December. They give birth to one to three young at a time, usually in May or June after a gestation period of seven months. The fawns wear a reddish-brown coat with white spots that helps them blend in with their environment.

“What can I feed the robins in winter weather?” Provide water. You could feed robins chopped fruit, suet, mealworms or nuts placed on a tray feeder. Planting fruit trees will help future generations of robins.

How many birds
are there?

A University of Nebraska-Lincoln professor said that there are almost twice as many species of birds as currently thought. UNL’s Robert Zink said that there are nearly twice as many bird species across the globe as widely believed because so many birds have been wrongly classified as belonging to the same species. Zink’s concept — the phylogenetic species concept — looks for distinguishable differences among groups, either genetic or in appearance, internal or external, in determining whether birds are of different species. Some scientists object to Zink’s notion that the world contains about 18,000 species instead of the widely accepted 10,000.

The Albert Lea Audubon Society will be host a meeting at 6 p.m. Tuesday at Southwest Middle School’s Little Theatre. The business meeting will be followed by a presentation from Stan Tekiela on wolves, foxes and coyotes at 7 p.m. The event will be free and open to the public and there will be drawings for jars of honey following Tekiela’s talk.

At the Hormel Nature Center in Austin

There will be free entrance to all national parks during the weekends of National Park Week. The 118 National Park Service sites that normally charge entrance fees will offer free admission on April 15, 16, 22 and 23. There are also free or reduced rate annual passes available for active duty military families, fourth grade students, senior citizens, volunteers and people with permanent disabilities. National Park Week starts with National Junior Ranger Day on April 15. Throughout the country, kids of all ages can take part in family friendly events and earn a park-specific Junior Ranger badge. Children can see bald eagles up close at Mississippi National River and Recreation Area, participate in crafts at Lowell National Historical Park, go on an archeology dig at Chiricahua National Monument or test their GPS skills in Hawaii Volcanoes National Park.

“Who looks upon a river in a meditative hour, and is not reminded of the flux of all things?”— Ralph Waldo Emerson

“In order that people may be happy in their work, these three things are needed: They must be fit for it; they must not do too much of it; and they must have a sense of success in it.” — John Ruskin