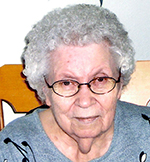 Betty was employed for many years in mostly credit positions in Indiana and Minnesota. She graduated from Madison Township High School in 1942. She was a long time member of the Women of the Moose in Mishawaka, Indiana, and den mother in the Boy Scouts in Osceola, Indiana.

Funeral services for Betty will be at 11 a.m. Monday at Bubb Funeral Chapel, 3910 N. Main St. in Mishawaka. Friends will be received one hour prior to the services on Monday. Burial will follow at St. Joseph Valley Memorial Park in Granger, Indiana.