Mary Jean Pagenkopf, 90, of Wells died Sunday, April 2, 2017, at Good Samaritan Society of Albert Lea. A funeral service will be at 10:30 a.m. Saturday at Open Doors United Methodist Church in Wells. The Revs. Paul Woolverton and Kent Otterman will officiate. Visitation will be from 4 to 7 p.m. Friday at Bruss-Heitner Funeral Home in Wells and will continue one hour prior to the service at the church on Saturday. Interment will be at Rosehill Cemetery in Wells. Bruss-Heitner Funeral Home in Wells is assisting the family. To leave an online condolence, visit www.brussheitner.com.

Mary Jean was born April 14, 1926, in Alden, the daughter of Leslie and Grace (Ostrander) Register. She attended country school at a young age, often riding to school in a sleigh. Mary Jean grew up during the Great Depression, so she knew the value of preparing meals and feeding her family. She attended Alden High School, where she was a Blackhawks cheerleader and played cornet in the school band. She graduated in 1944 and went on to teach at a rural country school. She was united in marriage to Harold Pagenkopf on June 20, 1946, at Alden United Methodist Church. She worked for many years for Swift Eckrich in Wells. 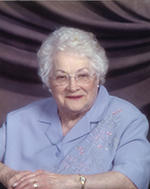 Mary Jean was always dedicated to any of life’s endeavors, and was a great leader and organizer. She was an active and longtime member of Wells American Legion Auxiliary Post No. 210, and was a member and past president from 1992 to 1994 of Wells Veterans of Foreign Wars Auxiliary Post No. 1778. She obtained her driver’s license later in life in order to travel and give rides to fellow auxiliary members to promote more active organizations. She was a worthy matron in the Order of the Eastern Star, an active and faithful member of Open Doors United Methodist Church and a campfire leader.

Mary Jean always had baked goods and treats ready, and the coffee pot was always on for anyone who might stop by to visit. At Mary Jean’s house, nobody would go hungry, including the neighborhood children who were treated as family. At the holidays, she would go all out decorating to welcome loved ones into her home. Mary Jean enjoyed playing cards, sewing, crafts and bird-watching. She also enjoyed collecting ceramics, pottery and Barbie doll clothes.

Of the six children in her family, Mary Jean was the last surviving sibling. She is preceded in death by her parents; husband, Harold; and five siblings, Vivian Cadwell, Gordon Register, John Register, Alan Register and Patricia Hitchcock.

Mary Jean’s family would like to thank the caregivers of Good Samaritan Society, as well as her family and friends who were so generous with their love and kindness and spent time with her while she was a resident there.