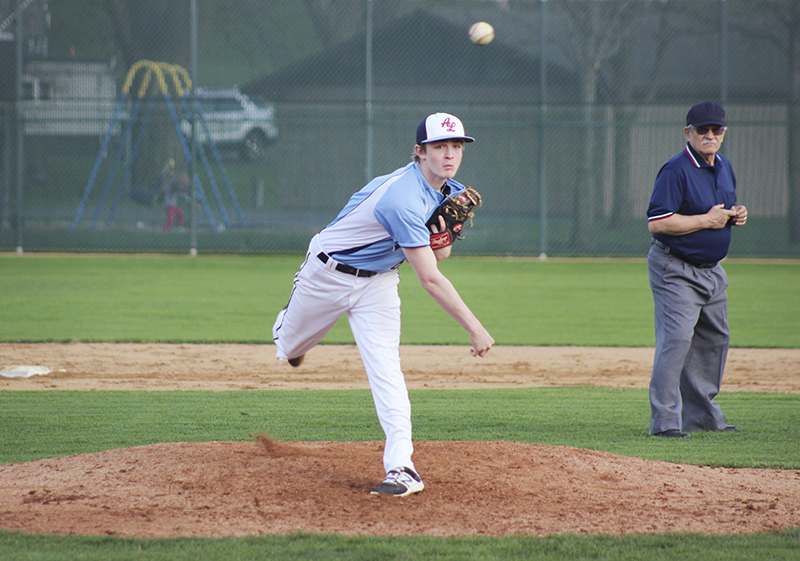 It wasn’t the prettiest game a fan will ever see, but it was one that sent the Albert Lea crowd home with a smile.

The Albert Lea Tigers welcomed the No. 2 Northfield Raiders to Hayek Field Tuesday evening. Albert Lea starting pitcher-turned first basemen Cody Ball sent the visitors home with their second loss of the season when he cracked a first-pitch, game-winning RBI double to left center to give the upstart Tigers a 10-9 win.

It was a back and forth game, but the Tigers got the better of the Raiders in the early going.

Albert Lea jumped out to a 5-0 lead through the first two innings thanks to some sloppy play by the Raiders in the infield and timely hitting by Tigers’ outfielder Alex Goodmanson, who delivered a two-run single off Raiders’ starter Ross Beumer, who helped eliminate Albert Lea in the section championship in 2016.

“It was very reminiscent of the game against Owatonna (last week),” Tigers coach Sean Gaston said after the game. “We seemed to have a lot of fire coming out of the gate in both games. I’ll take that (kind of) start any day.”

Albert Lea would add two more runs in the second inning. With two outs, Blake Simon and Ball each singled, then Ben Witham crushed a two-run double to right center.

But the Raiders’ bats would wake up, in large part to burly third basemen Hunter Koep, who blasted not one, but two three-run homers in Tuesday’s game.

His first came in the third inning.

After two runners reached on consecutive errors, Koep took a 2-2 pitch from Ball and mashed in over the 350-foot sign in left center.

The Raiders would add two more runs, thanks to RBIs from Carter Hodapp on a triple and Lars Prestemon on a sacrifice fly. 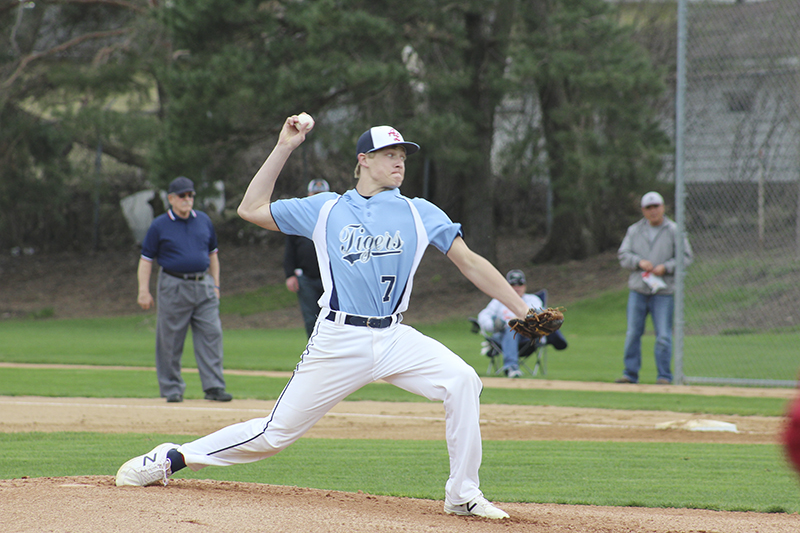 Albert Lea’s Cody Ball delivers a pitch in the first inning. He had the game-winning hit later in the game. – Jarrod Peterson/Albert Lea Tribune

Albert Lea broke the tie with three runs in the fourth inning. Witham had an RBI single, then Zach Edwards delivered a two-run double to right center.

Hodapp would get one run back for the Raiders with an RBI double in the fifth inning, but it was the sixth inning that Northfield would take its first lead of the game.

Luke Lunderby singled to start the inning, then Beumer reached on the Tigers’ fourth error of the game. A sacrifice bunt by Conner Malecha put runners on third and second with one out for Koep.

He would punish a pitch from Ty Harms and put it over the scoreboard in right field.

“We had talked as a staff before about putting him (Koep) on,” Gaston said. “We were trying to put him on. We were trying to throw it out of the zone and if he hits it, he hits it. We certainly didn’t expect that. It was a frustrating blow for us, but since the first game of the year, we have talked about being resilient and bouncing back. And we did it multiple times this game.”

Including in the bottom of the seventh inning.

After a quick first out, Harms singled and Logan Stadheim came in for him as a pinch runner.

Stadheim was picked off by Northfield pitcher Nic Zabel.

After Alex Bledsoe walked, Simon singled up the middle.

Thanks to some high-risk, but heads up baserunning, Bledsoe advanced to third. On the throw to third, Simon broke for second. Koep saw Simon trying for second and made a wild throw to try to get him out. The ball ended up in right field and Bledsoe crossed the plate to tie the game at 9-9.

“That’s definitely not what we teach,” Gaston said. “But I don’t mind the aggressiveness. If a guy thinks he can make it, go for it. We teach to be aggressive.”

All of that set up an at-bat for Ball, who, on the first pitch he saw from Zabel, smacked into left center for the game-winning hit.

“If we want to be a great team, we have to be able to come back,” Gaston said. “Our boys fought back in this game.”

Harms picked up the victory on the mound. He came on in relief for Ball with two outs in the fourth inning.

The Tigers outhit the Raiders 15-6.

Albert Lea will hit the road for the next four games. The first of the four road games will take the Tigers to Mankato West at 5 p.m.  Thursday.