Memorial services for LaVonne Marilyn Williams will be at 2 p.m. Saturday at Hayward Lutheran Church. The Rev. Joshua Enderson will officiate. Visitation will be from 4 to 6 p.m. Friday at Bonnerup Funeral Service in Albert Lea and again one hour prior to the service at  thechurch. Interment will be in Hayward Cemetery.

LaVonne Marilyn Williams, 91, died Friday, May 19, 2017, at St. John’s on Fountain Lake Assisted Living. She was born March 22, 1926, to parents LeBert and Mae (Campbell) Conley on the family farm near Hayward. LaVonne attended grade school at Campbell School and graduated from Albert Lea High School in 1944. 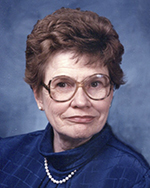 After passing a secretary test, LaVonne hopped on a bus to go live in Washington, D.C., where she began working for the U.S. Department of the Treasury. It is while working at the nation’s capital that LaVonne met the love of her life, Pennsylvania native Paul Williams. The couple married Dec. 28, 1946. They briefly lived in Pennsylvania and Alabama when Paul was in the Army during the Korean War. In 1949, they made their home in Albert Lea and Hayward later on.

LaVonne and Paul owned Hutch’s Corner service station in Hayward, where she was the bookkeeper. In 1965, she became a school bus driver. Along with Min Westland, LaVonne started Calico Hutch Quilt Shop in Hayward and operated it for 18 years. She highly enjoyed politics, becoming the mayor of Hayward.

LaVonne was an active lifelong member of Hayward Lutheran Church, participating in the altar guild, ladies aid and church activities. She was also involved in Parent Teacher Association and volunteered as a den leader for Cub Scouts. LaVonne was very talented at crocheting, quilting and hardanger.

LaVonne was preceded in death by her parents; husband, Paul, in 1993; brother, Dick Conley; as well as her sister, Carol Conley.

Memorials are preferred to Hayward Lutheran Church or Hayward Cemetery.