Teresa Rose, the daughter of Lawrence J. and Mary (Bussert) Schmitz, was born Nov. 22, 1931, in Faribault. She graduated from Bethlehem Academy in 1949, then went to work at Blooming Prairie Bakery, where she met the love of her life that summer. 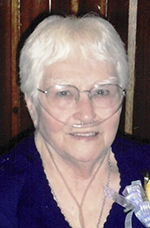 She married Neelan Ferrington on July 25, 1950, in Faribault. She loved to cook, bake and grow things on the family farm north of Blooming Prairie. When the children were older, she worked at local restaurants — using her cooking skills until Neelan retired. The two of them wintered in Arizona and took several cruises until Neelan passed away in 2010.

Teresa is survived by her children Mary (William) Bussert of Faribault, Stanley (Lynne) of Kiester and Kenneth (Krys) of Otsego; seven grandchildren; 11 great-grandchildren; her sister, Barbara (James) Dusbabek, of Garrison; brother, John (Rosemary), of Waterville; and sister-in-law, Mary Lou Schmitz, of Faribault; along with other relatives and friends.

Funeral services will be at 11 a.m. Tuesday at First Lutheran Church in Blooming Prairie. The Rev. Heidi Heimgartner will officiate. Visitation will be for one hour prior to the service at the church. Interment will be in Union Cemetery in Bixby. Services are prearranged and performed by Worlein Blooming Prairie Funeral Home. Condolences may be expressed to the family online at www.worlein.com.