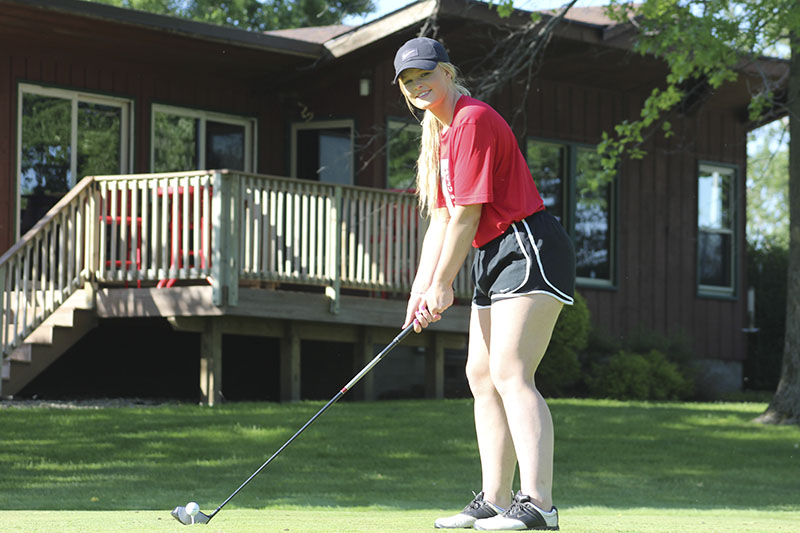 Elynn Johnson is the first girl from Alden-Conger to make it to the state tournament in 25 years. Jarrod Peterson/Albert Lea Tribune

Senior year in high school is supposed to be a memorable one.

It was for Alden-Conger’s Elynn Johnson — it was a mix of highs and lows.

Johnson graduated earlier this month from Alden-Conger, where she was a three-sport athlete.

She played volleyball, basketball and golf during her time at the school.

But it was the sport of golf that really grabbed her attention, mostly because her dad, Doug, introduced her to it.

She started with the sport in seventh grade and remembered coming home from the first practice having second thoughts.

“I was not good,” Johnson said. “I couldn’t hit the ball, and it was very frustrating.”

Starting and learning new things always bring with it a learning curve. Over time, Johnson adjusted and improved to the point where she became one of the better golfers on the girls’ team at Alden-Conger.

Her dad was by her side during every round, teaching and coaching her.

He was with her until he passed away from brain cancer in October.

“He had been sick for about a year before he passed,” Johnson said. “He had a really big brain bleed, but we didn’t know what it was about. Eventually we found out it was a brain tumor. The brain bleed has caused some damage with his ability to speak and comprehend things, but he still golfed. He was totally passionate about that.”

Living in a smaller community has significant benefits, especially in a time of need. Johnson said the community has come together to help her and her family through a time of tragedy.

“We have gotten so much support from the community,” Johnson said. “Everyone is your No. 1 fan. Everyone is there for you. It’s been really nice.”

Johnson saw her years of hard work pay off a few weeks ago when she scored well enough at the section meet to earn an individual spot in the state tournament. She will be the first girl representative from Alden-Conger in the last quarter century.

“My coaches tell me I’m going to state every year,” Johnson said. “So when they told me I’m going this year, I kind of brushed it off. But when I found out I was going I was so surprised because my final score was higher than it had been in past years. But I’m so happy and excited.”

Once she wraps up her golf season, Johnson plans on attending the Aveda Institute and plans to focus on cosmetology.

“I’ve been big into doing makeup and stuff,” she said. “I’m a freelance makeup artist for proms and weddings, and that’s something I have a passion for.”

But she still has some unfinished business left on the course.

Today she will tee off in the state tournament at Pebble Creek in Becker.

While her dad won’t be there to share the experience this moment with his daughter, Johnson has said she still notices him around, especially on the course.

“It’s the worst thing ever not having him around,” she said. “But there is always a light in my head. He is always with me, always coaching me.”

Sunday liquor sales to begin next month in Albert…