Al Batt: How many nests do different pheasant hens make each year? 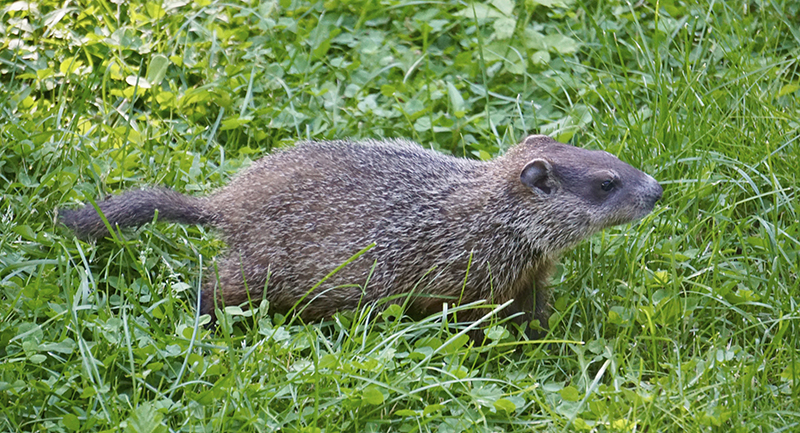 A whistle pig, or groundhog, is a member of the rodent family. Al Batt/Albert Lea Tribune

“Everything is nearly copacetic. I have my share of faults and I’m thankful for them. If I had no faults of my own, I wouldn’t take so much pleasure in noticing those of others. I’m trying to find an alarm clock that rings only when I’m ready to get up. Those things are more rare than pension plans for mayflies. My sister Cruella was reading this newspaper when she found a fascinating fact, at least to her. She asked, ‘Did you know that every time I breathe somebody dies?’ I told her that she ought to try using a mouthwash.”

I had just gotten home from a visit to a part of the country where meadowlarks are commonly seen and heard. The song of the western meadowlark echoed in my mind. It was a pleasant earworm.

In my yard, it was too hot. The sun seemed too close.

I spotted the groundhog high in a small tree. It wasn’t beating around the bush. It was eating the leaves of a mulberry tree. Groundhogs have a great appetite for those. Groundhogs are also variously referred to as woodchucks, whistle-pigs or land-beavers. A woodchuck can’t chuck wood. That name is thought to have its roots in a Native American language. The name whistle-pig comes from the fact that, when alarmed, a groundhog emits a high-pitched whistle. I watched the groundhog devour dandelions and white clover on our lawn. Those who live trap the animals say that cantaloupe makes a good bait. I went outside. The animal whistled and fled.

“How many nests does a pheasant have each year?”

Pheasant hens will nest up to three times if their nests are unsuccessful or destroyed. If they lose the first nest, they will attempt a second. If they lose a second nest, they will try a third. They raise only one brood per year. They lay an average of 11-13 eggs on the first attempt and that number is reduced with each subsequent nesting. By the third nest, the hen might be incubating only one or two eggs. Some pheasants might nest in April, but mid-May through the first 10 days of June are the prime nesting period. Most of the nesting after that is likely renesting. The incubation period is 21 to 23 days.

It’s a word, chiefly British, meaning the bill or beak of a bird.

Only for whistle-pigs. The National Undersea Research Center performed a study on the effectiveness of deer whistles. I’m not sure why an undersea research outfit was studying deer, but they did. Air velocity whistles were mounted onto various vehicles. The researchers recorded the sounds the whistles produced. They discovered that the whistles made signals either unlikely to be heard because they were drowned out by engine noise, other vehicles, high winds or rain, or they were outside the normal hearing range of deer. A study published in the Journal of Wildlife Management concluded that whistles do not change deer behavior in any way. There are many other studies finding the same results. There is no hard evidence that deer whistles work.

“How does a Slinky keep squirrels away from feeders?”

The “Slinky,” the children’s toy, can work as a baffle. “Who walks the stairs without a care. It shoots so high in the sky. Bounce up and down just like a clown. Everyone knows its Slinky.” Thread the post holding the feeder through the Slinky and attach one end of the Slinky under the feeder and allow it to hang down around the post. A squirrel trying to climb the post will get a ride on the Slinky back to the ground. Please keep two things in mind. Squirrels are very good at what they do and nature bats last.

I spotted a spotted sandpiper. The spotted sandpiper is the most widespread breeding sandpiper in North America. It has bold dark spots on a bright white breast, an orange bill and a dark brown back. It walks with a teeter, bobbing its tail up and down. It has a stuttering flight on rapidly beating wings that are held stiffly with each wing showing a thin white line. It seldom flies higher than a few feet when moving along a rocky shoreline or mud flat. The females sometimes practice a breeding strategy called polyandry, where a female mates with several males, each of which cares for a clutch of eggs.

This delightful bit from Ruth Lynch of Decorah, “May a bird never splat on your windshield, Mr. Batt.”

“Reach as high as you can, then reach a little higher. There you will find magic and possibility. And maybe even cookies.” — Marc Johns

“Life is a series of commas, not periods.”— Matthew McConaughey