A graveside service for Maria L. Olsson will be at 3 p.m. Saturday at St. Theodore Cemetery in Albert Lea. The Rev. Kurt Farrell will officiate.

Maria passed away peacefully on Wednesday, July 5, 2017, at Thorne Crest Senior Living Community in Albert Lea. She was 84. 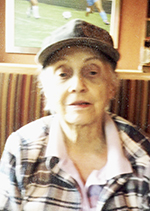 Maria Lucy Olsson was born May 26, 1933, to Per and Esther (Broberg) Olsson in Brooklyn, New York. She lived in Jamestown, New York, for four years, then returned to Brooklyn where she attended and graduated high school. She later received her bachelor’s degree from Brooklyn College with a master’s degree in political science and history. Maria was employed by the Andrew W. Mellon Foundation in Manhattan, where she would ride the subway for an hour each day to get to work. She worked there for 17 years. Maria was also an educator, working in the New York City school system for many years teaching junior high. She was a very devoted Christian, and served the Roman Catholic Church as a nun for 20 years. Maria loved reading and studying. She enjoyed her solitude and peace, where she would often spend hours focusing and learning more about her religion.

In 1985, Maria purchased property in Geneva. She lived there until she moved into Thorne Crest Senior Living Community in 2007 and would stay at Thorne Crest until her death. Maria enjoyed her time spent at Thorne Crest, from her apartment, then to transitional care and finally to the health care unit. She was always thankful for the care she received there and always felt at home.

Maria is preceded in death by her parents Per and Esther Olsson.

She is survived by her close friend and guardian, LeAnn Knox, of Albert Lea; as well as her friends and family at Thorne Crest Senior Living. Blessed be her memory.