Al Batt: When food is scarce, mimick spiders and trick friends into sharing 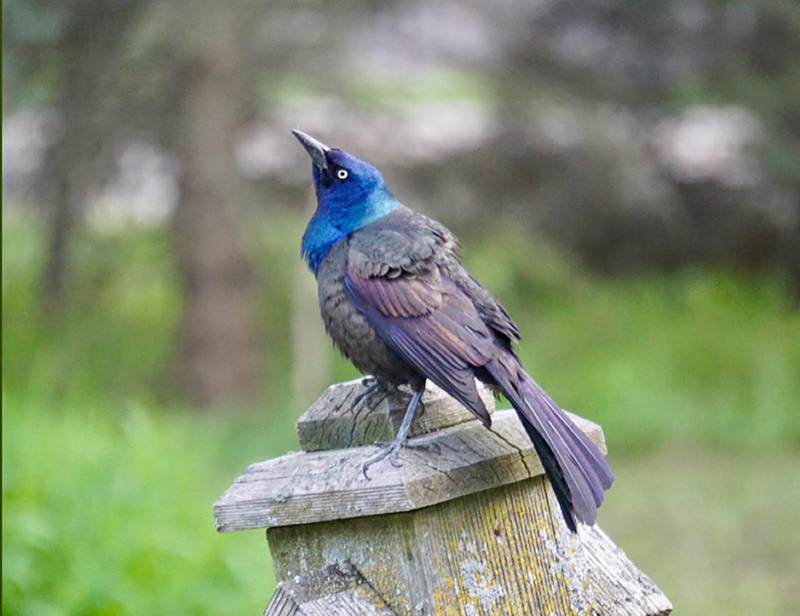 “Everything is nearly copacetic. I’ve discovered that I’m a psychic amnesiac. I know in advance what I’m going to forget. I helped my neighbor Still Bill, he makes more dust than miles, do a little remodeling on his house. I have a purple thumb in carpentry. Still Bill had a tail mounted on a wall. I asked him what kind of animal it was. He replied, ‘I don’t know, but it was a fast one.’”

I drove by a harvested field of sweet corn that had become a field of Canada geese. There was a single common grackle in the field. It was odd to see just one grackle.

Take a good look at a grackle. It really is a beautiful bird. Common grackles are abundant and widespread, though their populations declined by nearly 2 percent per year between 1966 and 2014, resulting in a cumulative decline of 58 percent according to the North American Breeding Bird Survey.

I see them here from early March to late November. They nest in May through July. The young leave the nest in 10 to 17 days. As soon as the breeding season is over and the young birds are well grown, they begin to gather in the summer roosts to form immense flocks. During October and November, these great flocks wander about over the country, often joined by starlings, cowbirds and other blackbirds, seeking suitable feeding places in grain fields, grasslands and swamps.

Cellar spiders are often found in damp locations like basements, crawl spaces and cellars, and are often confused with daddy longlegs, which are not spiders. Some cellar spiders use a sneaky trick to catch food. When food is scarce, they abandon their webs and seek the webs of other spiders. They tap on a web, mimicking the actions of a trapped insect. When the owner of the web comes to catch its prey, the cellar spider captures and eats it.  When they are disturbed or when they are under a threat of attack, cellar spiders start vibrating violently in their webs to discourage an enemy. This has earned them the common name of vibrating spiders.

Barb Lamson of Mankato asked why birds pluck her flower petals? Certain flower buds provide birds with nutrition in early spring when their preferred fruit and seeds aren’t available. Favorites of bud and blossom eating birds in the spring are apple, cherry, crabapple, forsythia, peach, pear, plum and red maple. Cedar waxwings, northern cardinals, house and purple finches, blue jays, grouse and American goldfinches are flower eaters. While blossoms are most often eaten during spring migrations, flowers that bloom later in the year are eaten, too.

“How big do eagle nests become?” On average, bald eagle nests are 2 to 4 feet deep and 4 to 5 feet wide. Each year, a pair adds material to the nest. One nest near St. Petersburg, Florida was 20 feet deep, 9.5 feet wide and weighed nearly 3 tons.

“How long do ducks live?” According to the Bird Banding Laboratory of the USGS the longevity for a mallard is 27 years, American black duck 26, blue-winged teal 23, and wood duck, northern pintail and canvasback each reaching 22 years of age. None of these ducks come close to the ages of two ducks that are still surviving. Donald made his first appearance in 1934 and Daffy showed up in 1937.

“What is a pioneer plant?” Pioneer species are hardy species that are the first to colonize disrupted or damaged ecosystems, beginning a chain of ecological succession that ultimately leads to a more biodiverse ecosystem.

“If someone asked me what my idea of luxury is, I think my answer would be: flowers in the house all year around.” — May Sarton