She was born Dec. 22, 1929, in Newman Grove, Nebraska, but was raised in Albert Lea, where her family settled when she was young. While a teenager, she and her mother moved to Sioux Falls, South Dakota, where she met her future husband, William “Bill” Nelson. After graduating from high school in Sioux Falls, she moved to New York City to become a fashion model. In 1951 she married Bill in Annapolis, Maryland, when he graduated from the U.S. Naval Academy and was commissioned as an officer in the U.S. Air Force. They subsequently had two children, Elizabeth and William Jr., and were stationed at various bases. The Nelson family moved to Lompoc, California, in 1968, when Bill was assigned to Vandenberg Air Force Base. 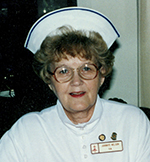 Sadly, he passed away from cancer in 1969 while still on active duty, but the family stayed in Lompoc, where Johnnye was active in church activities at Lompoc’s Valley Chapel. She also went back to school. First, she earned her Associate of Arts degree and her licensed vocational nurse degree from Allan Hancock College in Santa Maria, California. In 1977, she relocated to Minnesota, where she earned her registered nurse degree from Riverland Community College in Austin. She practiced nursing for 28 years at Good Samaritan Society of Albert Lea, retiring at the age of 78. She was actively involved in her home church, Our Father’s House. In 2016, she moved to California to live with her daughter and son-in-law and to receive medical care.

She is survived by her daughter and son-in-law Elizabeth (Nelson) and Philipp Walter of Marina del Rey, California; son, William B. Nelson Jr., who is the pastor of First Baptist Church of Lompoc; two granddaughters and their husbands, Jennifer (Nelson) and Tim George of Long Beach, California, and Amanda (Nelson) and Ryan Stong of Monrovia, California; cousin, Maureen Carlson, of Albert Lea; aunt, Donna Gavle Slocum, of Houston, Texas; and cousins (Donna’s daughters) Susan Slocum of Sydney, Australia, and Martha Slocum of Houston.

A funeral service took place at 1 p.m. Wednesday at First Baptist Church of Lompoc, after which there was be a brief graveside service at Evergreen Cemetery of Lompoc. The graveside service was followed by a reception at the church. In lieu of flowers, donations can be made in Johnnye’s memory and cards can be sent to First Baptist Church of Lompoc, 220 West Cypress Ave., Lompoc, CA 93436.