One woman dead in early-morning house fire in Austin 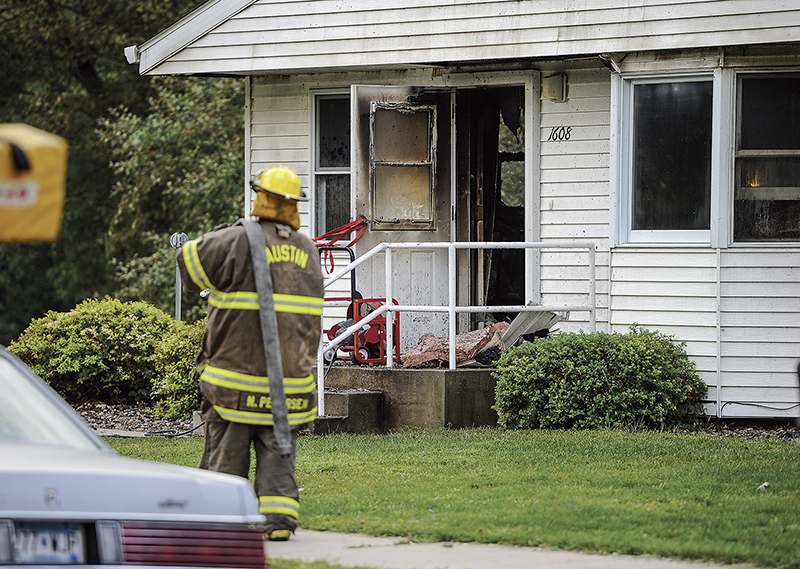 Fire crews were cleaning up Friday morning from a fire at 1608 Fourth Street SW that claimed the life of one person. - Eric Johnson/Albert Lea Tribune

AUSTIN — Authorities are investigating an early-morning house fire that claimed the life of an Austin woman.

According to Austin Fire Chief Jim McCoy, firefighters were called at 5:27 a.m. to 1608 Fourth Street SW after a passer-by reported the fire. When firefighters arrived flames were visible shooting out of the house.

A gaping hole in the roof is left behind by flames from an early-morning house fire at 1608 Fourth Street SW that claimed the life of one. – Eric Johnson/Albert Lea Tribune

An individual told emergency responders that someone was still in the house. An officer found a 40-year-old woman in the bedroom. She was unresponsive and firefighters had to get her out through a window. She was pronounced dead at the scene by Gold Cross after CPR failed to revive her.

Austin police detectives were also on the scene and are looking into the case, because nobody witnessed the death at the time of the blaze, according to authorities. No foul play is suspected.

An autopsy will be conducted in Rochester.

The last fatal fire in Austin was Feb. 17. A 58-year-old man died in that blaze, which was also the result of a cooking fire.