Vikings fall to the Bearcats 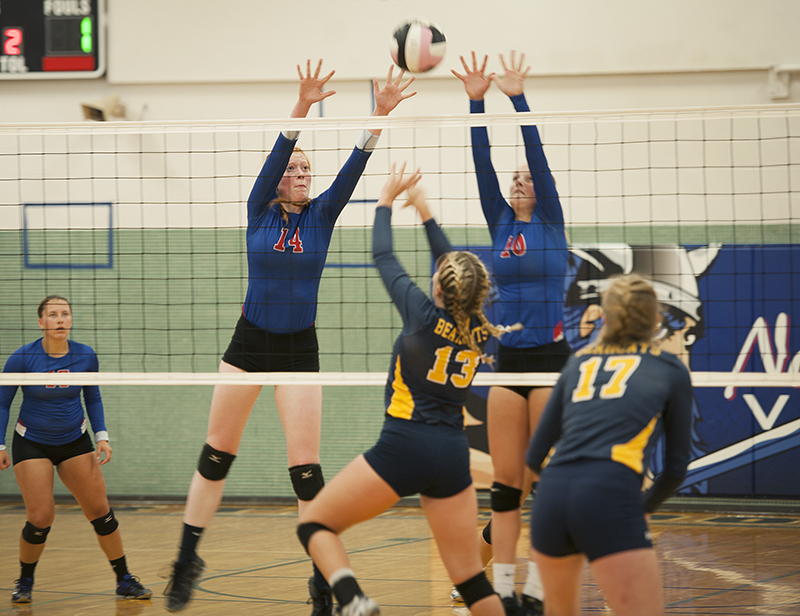 Seniors Lindy Harris and Makenzi Duvall reach up for one of the team’s many blocks Thursday night. The Vikings comeback attempt was stopped in a heartbreaking fourth set, losing to the Bearcats 25-23. - Tyler Julson/Albert Lea Tribune

NORTHWOOD — The Northwood-Kensett volleyball team was unable to grab the victory in their 2017 home opener against North Butler. The Vikings stuck with the Bearcats throughout most of the sets, but ultimately fell three sets to one.

The Vikings got out to a hot start in the first set scoring the first handful of points, but it wasn’t long before the Bearcats responded. The two teams battled back and forth, but in the end North Butler would go on to win the set handily, 25-16.

There was more of the same in the second set. Northwood-Kensett opened up with a sizable run, but would again lose the set after exchanging the lead multiple times. The set was slightly closer, with North Butler winning 25-18. 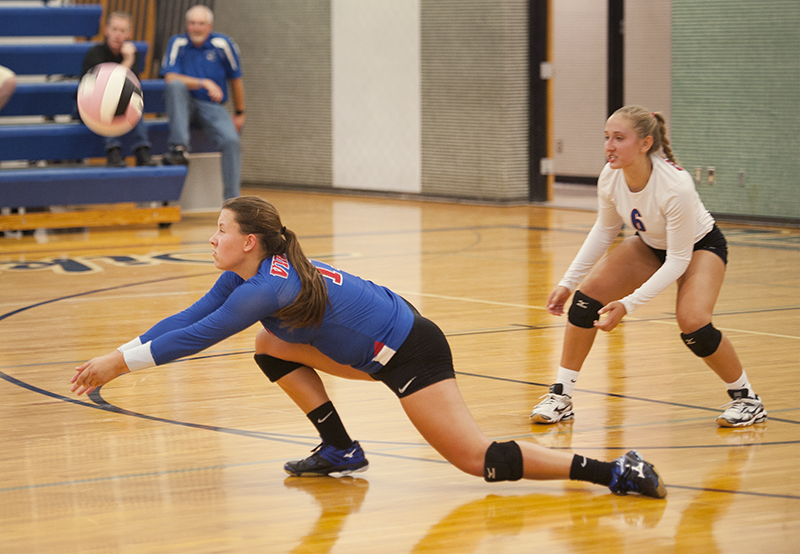 Junior Laura Hopperstad digs a ball during the fourth set of Northwood-Kensett’s match against North Butler Wednesday night. The Vikings would lose the match in four sets, falling to the Bearcats 3-1. – Tyler Julson/Albert Lea Tribune

The third set is where things started to get interesting for the Vikings. The two teams seemed to reverse roles from the previous sets. Northwood-Kensett would end up pulling away from North Butler near the end, winning the third set 25-22.

Down three sets to one, the Vikings needed to win the fourth to keep it going. The set came down to the very end, with both teams going back and forth with one another. Multiple late lead changes and long volleys had both teams screaming with emotion. The Vikings would end up losing the fourth set by a heartbreaking two points, 25-23.

Stellar play at the net by seniors Lindy Harris and Dusti Bradtrud, as well as juniors Laura Hopperstad and Josie Einertson was a big help to the Vikings during the final two sets. Throughout the game Bratrud had 20 assists, while Einertson had six kills and 11 combined blocks.

They were also aided by the great back-row play of seniors Makenzi Duvall, Sarah Pederson and Paige DeArmoun. Pederson and DeArmoun each recorded 12 digs on the match.

Despite the loss, the Vikings showed great poise and a never-give-up attitude, especially in the final two sets. They fall to 1-1 on the season and will travel to Nashua-Plainfield on Tuesday to take on the Huskies.