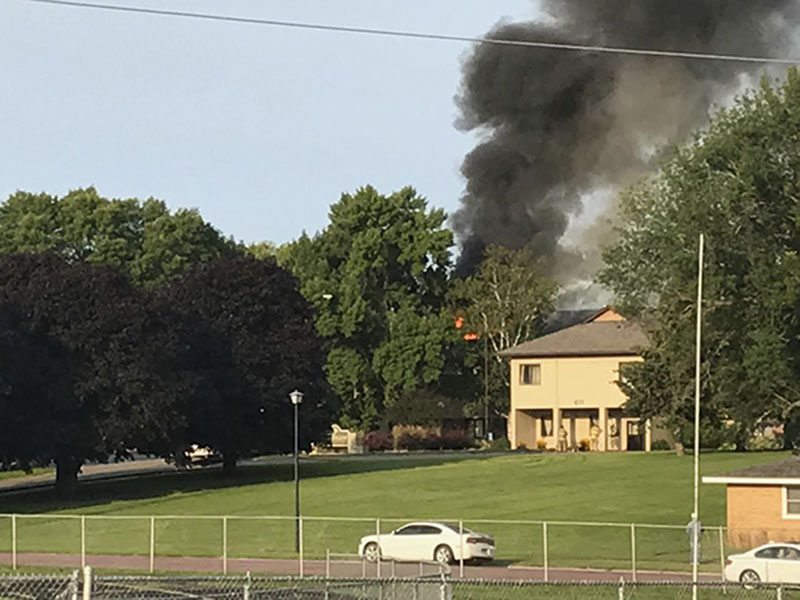 Flames and smoke were visible from a fire Saturday morning at an apartment complex in Wells. — Lisa Foley/Albert Lea Tribune

WELLS — An apartment building in Wells was severely damaged in a fire Saturday morning.

The approximately 20 people who were inside of the Wellington Estates apartment building at the time of the fire were able to exit the building safely, said Wells police officer Eric Neubauer. Flames from the top of the facility were visible when he arrived on scene after being called at about 7:17 a.m., he said.

The American Red Cross presented each family that was displaced by the fire a voucher to stay at a hotel for the night and $150, said Wells Fire Chief Guy Kimpton.

He said the fire started in the crawlspace on top of the second floor of the building. Water and smoke damage were sustained throughout the building, but the apartment facility should be salvageable, Kimpton said. 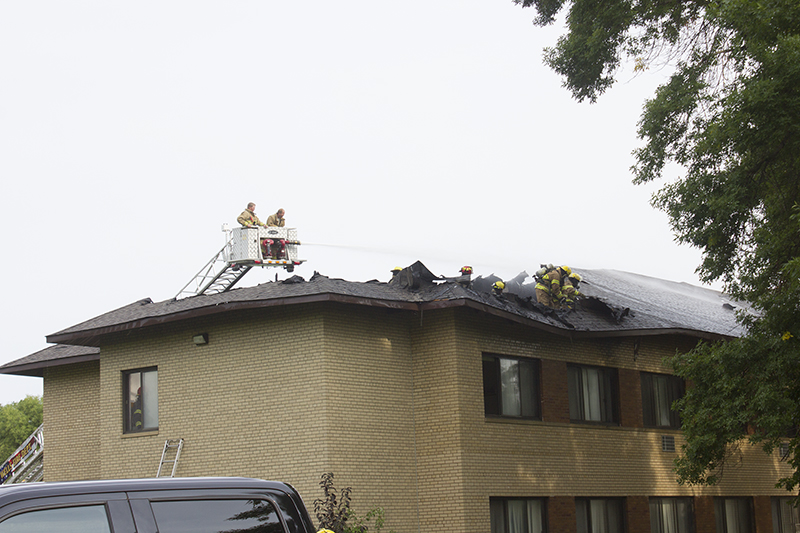 Firefighters work at the scene of a fire Saturday morning at an apartment building in Wells. – Sam Wilmes/Albert Lea Tribune

Apartment resident Elaine Grunzke said she was inside the apartment building when the fire started.

“And then my neighbor guy come over and knocked on my door, and I said, ‘You know, something don’t smell right.’ And he said, ‘No, we better check this out.’ And we went down, just right down in the hallway from my room, and there was, like, two brown spots on the ceiling, and he said, ‘I’m calling the fire department,’ so then he did. And the fire department come right away, and the cop was here, and (the fire) all tore loose.”

Grunzke said they knocked on doors to help people leave the building safely, and she expects the building to have substantial smoke damage.

Grunzke said the fire was upsetting.

“This building was a hospital, and nobody has ever seen a fire in this place since they rebuilt this into apartments, and my apartment is gone,” she said. “The whole roof is gone.”

The cause of the fire has not been determined, and the State Fire Marshal’s Office was en route to the scene after the fire, Neubauer said.

The American Red Cross and about half a dozen fire departments were on scene at about 9 a.m. Saturday.