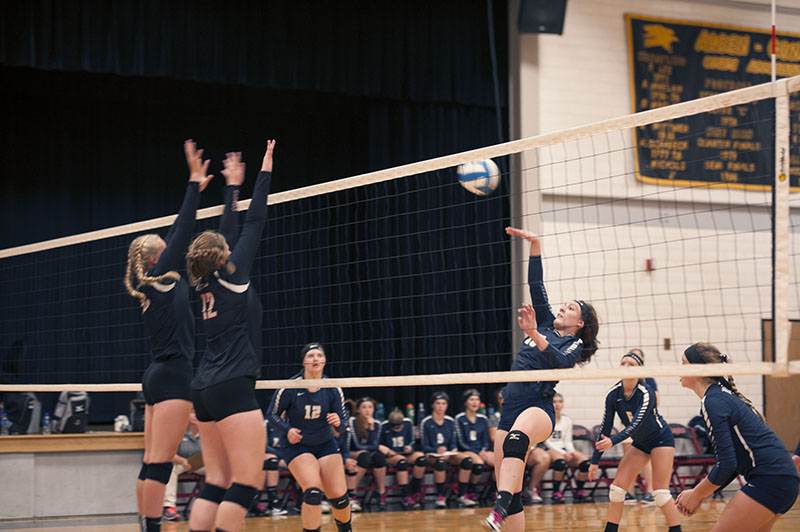 Glenville-Emmons junior Daniela Rizo falls back to send the ball over the net in an attempt to keep the volley alive. - Tyler Julson/Albert Lea Tribune

ALDEN – Although Alden-Conger and Glenville-Emmons are joined on the football field, On Monday  the two schools squared off on the volleyball court. The power of the Knights would prove too much to handle for the Wolverines as they won convincingly in three sets.

Starting in the first set, the initial points were going back and forth rather evenly with both teams taking the lead from one another. However, once the Knights gained some momentum, they refused to give it up. After being tied at five points, Alden-Conger would jump out to a 12-6 lead and would ride that wave of momentum through the end of the first set, winning 25-11. 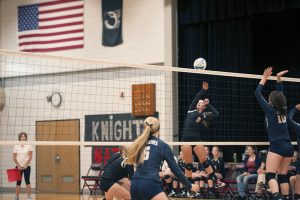 Alden-Conger freshman Grace Erickson hits the ball back onto Glenville-Emmons’ side of the court in Monday’s 3-0 sweep of the Woverines. – Tyler Julson/Albert Lea Tribune

The Knights started the second set with an impressive 13-point run, served by junior Erika Bute. To the Wolverines credit, they never gave up and after being down 19-1 in the set, they would rally to nine points before the Knights would win the set 25-9.

The third and final set of the night would be the closest, but the Wolverines would still drop the set by double digits, 25-12.

Alden-Conger moves to 2-1 on the season and will play again tonight as they hit the road to  take on the Panthers of NRHEG.

Glenville-Emmons falls to 0-5 on the year and will look to find a win tonight as they face off against the Grand Meadow Superlarks.

Check back with the Tribune for results as they become available.