Al Batt: Migrating Hawk Ridge raptors are a reason to plan a trip to Duluth 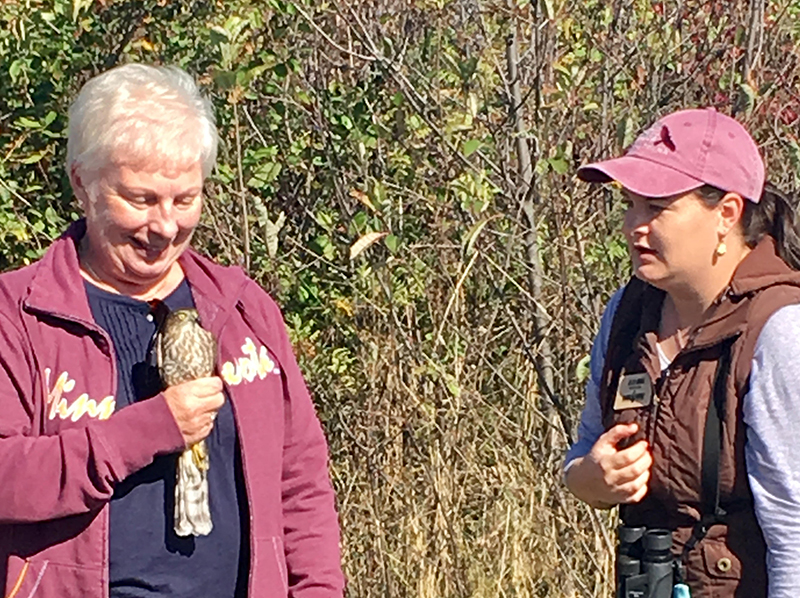 “Everything is nearly copacetic. I’m still finding it hard to like anyone who is ahead of me in a line. I ate a hot pepper yesterday. I knew it was hot when I woke up sitting in the freezer in my underwear. I go to the gym every day, but they still refuse to refund my membership. It’s their fault that I haven’t shed a single pound.”

“Well, it’s not my fault that I blame everyone else for my problems.”

I waited in my car in the parking lot as my wife did some needed shopping.

A pickup truck was parked facing me. House sparrows flew into the grill of the truck and came out with insects in their bills.

It was a cookout.

The birds loved food from the grill.

If you’ve had a good life and done it all twice, but you haven’t been to Hawk Ridge in Duluth in the fall, get thee there.

Migrating raptors coming from breeding areas in the north, concentrate in large numbers at the western tip of Lake Superior. Why? Because most raptors are reluctant to cross large bodies of water, so they veer southwest along the lakeshore. This creates a natural funnel right where Hawk Ridge Nature Reserve is located. Peak migration at Hawk Ridge is from mid-September to late October. Migration begins with American kestrels, sharp-shinned hawks and broad-winged hawks in August, and continues into December with the last of the red-tailed hawks, rough-legged hawks, northern goshawks and eagles.

The largest numbers of raptors are typically seen on days with winds from the northwest. Westerly winds are good, too. Winds from the south and the east don’t provide as impressive counts, but the birds tend to fly lower and be easier to observe. Hawk Ridge averages 76,000 raptors each year. On September 15, 2003, 101,716 broad-winged hawks were counted on that one day.

The Corpus Christi Hawk Watch at Hazel Bazemore Park is along the Nueces River and hosts the largest concentration of migrating raptors in the United States or Canada each fall. The average count there is 720,000, by far the largest count. Famous sites such as Hawk Mountain in Pennsylvania averages 18,000 raptors each year and Cape May in New Jersey 40,000 to 50,000.

Hawk Ridge gets 10,000 human visitors in September and October.

It was my pleasure to speak at the Hawk Ridge Bird Observatory Fall Gala and to visit Hawk Ridge once again. It was like winning the big jackpot at bird bingo.

Bonnie Williamson of Glenville and Ed Jensen of New Richland asked where are all the birds. The abundance of food available in nature right now may mean a slow down of visitors at the feeders. There is a plethora of fruits, berries and seeds available. Some birds have migrated and others are free to move about, as they no longer have any family obligations. There is always the possibility that a cat or a hawk is causing your feeders to become less busy. Your feeders will have many customers before long.

“How can I remember which one is a stalactite and which one is a stalagmite?” Stalactites and stalagmites are mineral formations in caves. A stalactite is an icicle-shaped formation that hangs down and is produced by minerals from water dripping through the cave’s ceiling. Most stalactites have pointed tips. A stalagmite is an upward-growing mound of mineral deposits that have precipitated from water dripping onto the cave’s floor. Most stalagmites have rounded or flattened tips. An easy way to remember which is which is that you might trip over a stalagmite.

“Nature is not a place to visit. It is home.” — Gary Snyder