Al Batt: Why birds face the same direction on utility wires and other answers 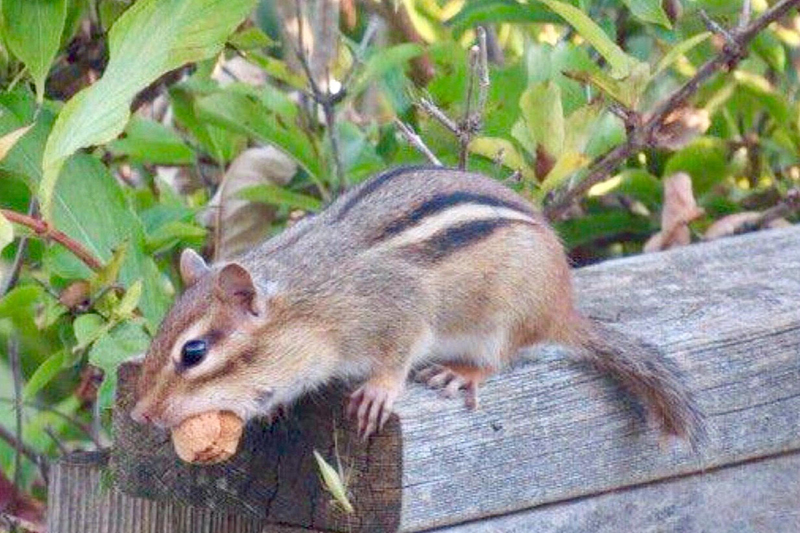 A chipmunk carries off its dinner. - Al Batt/Albert Lea Tribune

“Everything is nearly copacetic. I have a flip phone. It works finer than frog’s hair, but everyone picks on it. My son said that my phone is a way for the clueless to go wireless. My neighbor Weasel guffaws whenever he sees it. Weasel borrowed my chipper-shredder. He’s renting it out. He said he’d make it up to me by selling me a smartphone he borrowed from someone else. He said, ’I have one. I know what works. I’m a genius.’ It was all about him. I, I, I! I don’t trust a guy whose I’s are so close together. I didn’t buy the smartphone, but I bought a full-length mirror from him. Weasel said that JFK once saw himself in that mirror. I took it home and attached it to a door as far away from my shower as possible. I don’t need to see that every day. I did get spiffed up and take a good long look at myself in that mirror. I looked like I was 19 years old. I was chuckled until I remembered that everything in a mirror is reversed.”

I watched our cat, Purl, perform her daily ablutions.

The old saying is, “If a cat washes her face over her ear, it’s a sign the weather will be fine and clear.”

With that as a guide, I headed outside.

A flock of pelicans passed between the sun and me. About 50 pounds of pelican shadows went by just out of my reach.

My yard showed me its first dark-eyed junco and white-throated sparrow Oct. 2. There were still many butterbutts — yellow-rumped warblers — about. Raucous blue jays, noisy robins and flickers — our only brown-backed woodpecker — filled the rest of the yard. The robins were busy eating the fruits of the hawthorn and mountain ash trees.

“Do eagles use the same nest every year?“ Eagles have strong nest site fidelity, meaning they return to the same nest and territory each year. If they successfully produce young, they are likely to return to that nest year after year. A pair might choose to build a new nest in a different area if their previous nest failed to fledge eaglets or otherwise proved unsuitable.

“What are the little spots on apples?” They are lenticels. Each little spot is a pore in an apple’s skin through which it breathes.

“Did Ben Franklin really want the wild turkey to be our national bird?” Benjamin Franklin didn’t advocate for the turkey as the national bird. According to The Franklin Institute, he was against the bald eagle becoming the national bird, stating in a letter to his daughter that it was a “bird of bad moral character” whereas the turkey was a “much more respectable bird … a bird of courage.”

“Are earwigs destructive when indoors?” An earwig has a flat, reddish-brown body and short wings. The features that make them easy to identify are the conspicuous pinchers (cerci) on the tips of their abdomens. Earwigs can enter buildings in large numbers. They don’t cause any damage, but they are annoying. Think of an earwig as a brother-in-law and force a smile when you see one.

“Do woolly bear caterpillars forecast winter weather?” According to folklore, the wider the middle brown section is, the milder the coming winter will be. The number of brown hairs has to do with the age of the caterpillar. It’s evidence of either a previous late winter or early spring.

“Why do chipmunks make that ‘chuck’ sound?” Chipmunks respond to hawks flying over with an aerial predator alarm call, which is a hollow, resonant cluck that is repeated frequently. One chipmunk’s vocalization can cause a number of other chipmunks to produce the call as a warning to others.

Rushford artist Michael Sieve won the Minnesota Pheasant Habitat Stamp contest. His painting was selected by judges in the annual contest sponsored by the Minnesota Department of Natural Resources. Sieve is a first-time winner of the pheasant stamp contest and his painting will be featured on the 2018 pheasant habitat stamp. The pheasant stamp for hunting is $7.50 and is required for pheasant hunters ages 18 to 64. For an extra 75 cents, purchasers can receive the pictorial stamp in the mail. It’s also sold as a collectible. The revenue from stamp sales is dedicated to pheasant habitat management and protection.

“When you have to go to the bathroom, it’s too late to build a latrine.”— Chagdud Rinpoche

“Life is always either a tightrope or a feather bed. Give me the tightrope.” — Edith Wharton