Art G. Hedum of Tacoma, Washington, died Monday, Oct. 9, 2017, at Franciscan Hospice House in Tacoma. A memorial service will be at 2:30 p.m. Sunday at Medford Funeral Home, 310  E. Central Ave. in Medford. Friends may greet the family from 1 p.m. until the time of services at the funeral home. Burial will take place at Fort Snelling National Cemetery. 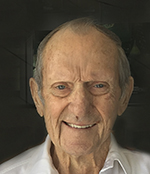 Art was born Feb. 11, 1933, in Kiester, the son of Thomas and Louise (Fosness) Hedum. He graduated from Kiester High School in 1951. He entered the Army and served in the transportation division and was honorably discharged in 1955. Art was a carpenter around the Kiester area and later went to work for Streater in Albert Lea for 18 years. Art relocated to Tacoma and worked as a union carpenter for the Alaska pipeline, building modules and Boeing aircraft. He was a member of the American Legion in Albert Lea and Eagles Club in Tacoma. Art’s life interests included traveling and spending winters in Yuma, Arizona. He loved gardening, fishing and spending time with his children and grandchildren, as well as baking.

Art is preceded in death by a granddaughter, Bridget; seven brothers and two sisters.