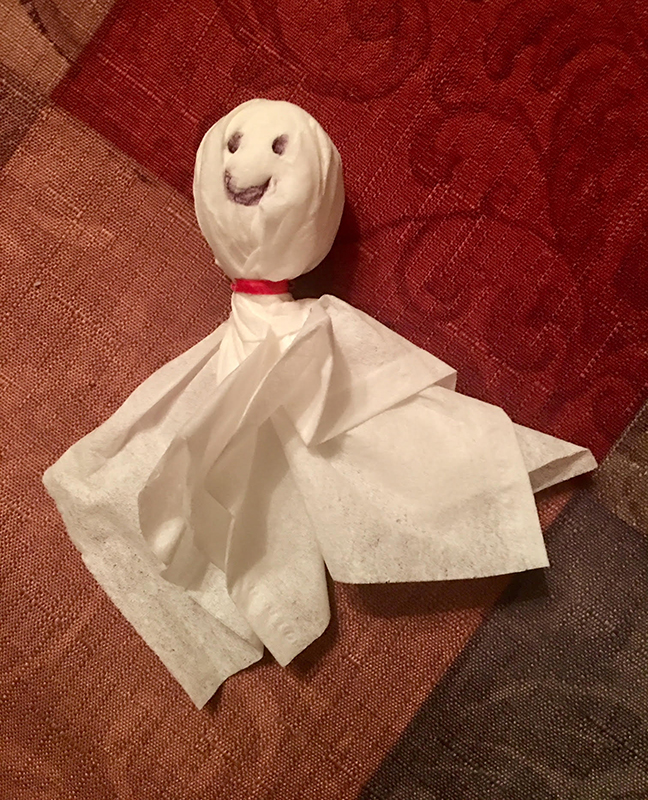 “Everything is nearly copacetic. I think the new cashier at The Food Crypt likes me. She was totally checking me out. You and your wife should come over for dinner. I’ve got a lot of expiring food products to eat tonight. I took Pop to the dentist. He was mad at me for various reasons. I spent the entire drive there listening to him tell me, ‘If ignorance were bliss, you’d be a blizzard’ and ‘I don’t know what makes you so dumb, but it’s working.’ We were late arriving because we had to turn around and go back home to get his teeth. Heredity works both ways.”

I enjoyed my daily treat of a Honeycrisp, which isn’t the most popular apple in the U.S., trailing Gala and Fuji in sales, but more Honeycrisp trees have been planted in recent years than any other variety, said researcher Rich Marini, a professor of horticulture at the Penn State College of Agricultural Sciences.

Between bites of that delicious apple, I watched an eastern screech owl that had been rousted from its roosting site by upset songbirds. Screech owls, approximately 8 or 9 inches long, have a varied diet that includes small rodents, insects, worms, bats, frogs, tadpoles, lizards, fish or birds.

I’d driven by a sign that read, “Wildlife Refuge.” There was a dead deer lying near it. The deer had almost made it. Speaking of refuges, many rats take refuge in Chicago. According to Orkin, Chicago is the U.S. city with the most rats. It’s followed by New York and Los Angeles. Minneapolis-St. Paul is 12th on the rattiest list of cities.

A doctor from England told me that he was stunned when he saw a cardinal here. I told him that I feel the same way.

The multi-colored lady beetles arrive in the yard and buildings at the time of the soybean harvest. They aren’t as bad this year as they have been other years. I take solace in that.

It’s time to make sure there is an ice scraper in the car. It snowed on Oct. 27. I don’t think that pleased anyone. That was too early for snow. We just get used to road construction and it snows. My wife and I worked in Haines, Alaska, one winter when it received 32 feet of snow. That’s feet, not inches. That was too much snow. I said so, but the weather doesn’t care what I think of it.

The weather had been raw. Then it snowed. In an attempt to stop bad weather and bring nice weather, children in Japanmake fine weather dolls called Teru Teru Bozu (pronounced tay-roo tay-roo boh-zoo). Teru means “shine” and bozu means “little boy.” The little dolls are considered good luck charms and are hung on the eaves of roofs outside windows to bring sunny days.

It’s easy to make a Teru Teru Bozu. Take two sheets of facial tissue and crumple them into a ball. Place the ball in the center of another tissue and wrap it around the ball. Tie a piece of string below the ball to make it look like a ghost. You could personalize your Teru Teru Bozu by drawing a face on the head or making any other colorful markings you‘d like.

“What bird can run the fastest?” It’s not the roadrunner, despite what Wile E. Coyote might say. An emu can exceed 30 mph, but would lose a race to the ostrich, which can hit 43 mph and trot at 31 mph for long distances.

“How long does a robin live?” About two years. Around 50 percent of robins perish each year. If a robin survives to midwinter, it will live another 1.7 years on average. One banded robin lived nearly 14 years.

“What is the world’s smallest bird?” It’s the bee hummingbird of Cuba. It’s 2.25 inches long and a male could weigh less than a dime.

“Where do purple martins spend the winter?” The largest swallow to nest in the U.S., the purple martin’s wintering grounds are the South American savannas, agricultural fields and lowlands east of the Andes and occasionally as far as northern Argentina. This includes Bolivia, Brazil, and elsewhere in South America.

“The other day I was thinking, ‘I just overthink things.’ And then I thought, ‘Do I though?’” — Demetri Martin

“A bookstore is one of the only pieces of evidence we have that people are still thinking.” — Jerry Seinfeld